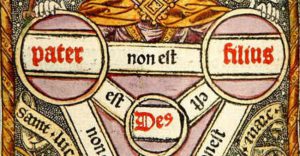 – – which is a bold thing to say, because it claims so much. “God…died.” The Bible itself says it that bluntly in a few places, such as Acts 20:28, “God purchased the church with his own blood.” This is how the voice of faith speaks when it confesses what God has done. This is a good Christian sentence.

When theologians get ahold of stark, paradoxical statements like “God died,” we have an instinct to clarify what is being said. We don’t want to remove the shock or the force, but we do want to make sure that the true paradox is being communicated rather than something else. We want to rule out misunderstandings that either take away the shock, or substitute for it a fake shock.

For example, it’s possible to think “God died” means something like, “just as there is a human death for humans to die, there is apparently a divine death for God to die, and that’s what happened at Calvary.” But the analogy is nonsense. Death is a concept that only works inside of the context of a creation. You need finite, contingent existence to have its eclipse or dissolution in death. “Divine death” as the analogue of “human death” is probably not even a coherent idea. It seems to belong to the category of “neat tricks you can do with language,” by combining any adjective with any noun: Square circle. Blue height. Quiet toddler. Cold heat. Divine death.

When you remove the chimera of a properly divine death, you can see that “God died” means that God experienced the only kind of death there is to experience, and that is creaturely death. How could that have happened? Insert here the Christian doctrine of the incarnation: the Son of God took into personal union with himself a complete human nature, and thus existed as one theanthropic (divine and human) person. He did not cease to be God, but he took up human nature into hypostatic (personal) union with himself. He made that humanity his own, and in that appropriated humanity he appropriated real human death. He died the only death there is to die, our death.

Notice, by the way, that in stating the incarnation we implied one of its presuppositions, the doctrine of the Trinity. In the sentence “God died,” the subject, “God,” has to mean “the second person of the Trinity, God the Son.” Each of the three persons is God, but they are distinct persons standing in interpersonal relationship to each other. The Son is not one third of God, or the Son part of God, or the nice version of God, but just God. God – – the Father – – so loved the world that he gave his Son, and God – – the Son – – died on the cross.

So with all the elaborate distinctions in place, the sentence

can also be said in this longer form:

The eternal second person of the Trinity, God the Son, took to himself human nature and experienced death through that assumed nature.

There is no trickery, no sleight of hand, in that expanded paraphrase of “God died.” The longer sentence is what the shorter sentence means, and both sentences are true as they mean each other. But a temptation does lurk here. The temptation is to feel disappointed by the longer sentence, as if something has been taken away, dissolved into too many distinctions, or spun into insubstantial refinement. The danger lies in hearing the longer sentence as if it meant:

Half of a third of God had a bad weekend.

But that is not what it means. It means that God died, and it means it in the only way that Christian theology can possibly mean it. The trick is to hear the longer sentence as meaning the same thing as the shorter sentence, and not to feel cheated by it. The trick is to never hear that third sentence (the dreadful half-third one, sorry I wrote it) clanking around in your mind. God did not take the easy way out, or save us in a way that leaves him untouched by the depth of human suffering. We can be confident that the almighty one went to the uttermost limits to accomplish our rescue.

God died on the cross! Charles Wesley certainly knew this, because when he sang

he immediately paraphrased it in terms of the second person of the Trinity’s vicarious action on our behalf:

The Father’s coeternal Son
bore all my sins upon the tree.