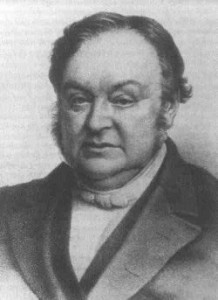 Today (December 28) in 1843, an unclean spirit cried “Jesus is victor!” as it departed from a young girl in Möttlingen, Germany.

The possessed girl was Gottliebin Dittus, and the presiding pastor was Johann Christoph Blumhardt (1805-1880). An account of the conflict can be read in the book The Awakening, available as a free pdf from Plough books. In fact, several books by and about Blumhardt and his son are available from Plough. The account of Blumhardt’s encounter with the unclean spirit is carefully written to avoid anything prurient, and to discourage unhealthy curiosity. But given the subject matter, it’s inevitably chilling and weird. It ranges from standard poltergeist behavior (loud knocking) to apparitions of the guilty departed, to intimations of the dark, spiritual world inhabited by fallen angels. Some of the scenes are, to speak anachronistically, straight out of exorcist movies.

Is this possession story just another weird, charismatic wrangling with the devil in the haunted hills of the Black Forest? Certainly purveyors of the sanctified paranormal will find plenty of standard fare in the story of Gottliebin Dittus. But the best thing about the Blumhardt story is the prominent role of Jesus. Blumhardt was relentless in his emphasis on Christ as the conqueror, the one who was engaging in victorious warfare against the powers of darkness in this strange event. The demon yelled “Jesus is victor!” as he departed, partly because he had heard a lot of solid preaching and theologizing in the course of the conflict. Here is the way Blumhardt typically talked about it:

At that time Jesus stood at the door and knocked, and I opened it to him. This is the call of Him who wants to come again: Behold, I stand at the door; I am already waiting there. I want to come into your life, want to break into your reality with the full power of grace given me by the Father, to prepare for my full return. I am knocking, but you are so engrossed in your possessions, your political quarrels, and theological wrangling, that you do not hear my voice.â€

After Gottliebin was restored to health and sanity, Blumhardt went on to have a powerful ministry, sparking numerous influential revivals (or awakenings, as the Germans would call them). His ministry (and that of his son) often had an element of physical healing about them, and both of them spoke in an odd pseudo-political dialect when they wanted to emphasize the power of Christ in the real world. The Blumhardt’s were wonderfully earthy, especially for people who held converse with the invisible world.

The spirituality of the Blumhardts and their revivals left a definite mark on european pietism at large. Karl Barth was also a great admirer of their work, and quoted them in the oddest places in his massive theological works. The Blumhardt message gave Barth one of the helpful jolts that made for his influential commentary on Romans, and in his later years he would name an entire section of the Church Dogmatics with the Blumhardt motto: “Jesus is Victor!”