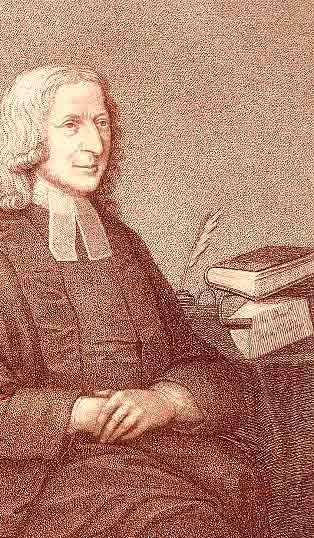 Someone recently asked me a question about John Wesley. The person who wrote to me had long found Wesley’s spirituality helpful and encouraging, but were troubled by something they had read: Somewhere they ran across a few lines from a letter John wrote to his brother Charles well into his sixties, saying “I don’t believe in God and I don’t know if I ever did.”

What in the world is the context of this shocking remark? By the time I had answered the question, I had written enough that I thought I’d post it here for wider circulation.

In one of my last I was saying I do not feel the wrath of God abiding on me; nor can I believe it does. And yet (this is the mystery) [I do not love God. I never did]. Therefore [I never] believed in the Christian sense of the word. Therefore [I am only an] honest heathen, a proselyte of the Temple, one of the phoboumenoi theon. [‘Those that fear God.’]

And yet to be so employed of God! and so hedged in that I can neither get forward nor backward! Surely there never was such an instance before, from the beginning of the world! If I [ever have had] that faith, it would not be so strange. But [I never had any] other elenchos of the eternal or invisible world than [I have] now; and that is [none at all], unless such as fairly shines from reason’s glimmering ray. [I have no] direct witness, I do not say that [I am a child of God], but of anything invisible or eternal.

And yet I dare not preach otherwise than I do, either concerning faith, or love, or justification, or perfection. And yet I find rather an increase than a decrease of zeal for the whole work of God and every part of it.

Here’s a link to the actual letter, a strange document from June 27, 1766 between two brothers who were so used to speaking freely to each other that their correspondence could be a mix of classical allusions and foreign expressions, and even bursts of shorthand (that’s why the version linked here is riddled with brackets and such). It’s not exactly coded correspondence, though Wesley did follow the eighteenth century genteel convention of shifting to French, Latin, Greek, or shorthand for writing out the most alarming statements.

It’s interesting that as you read further along in the letter, Wesley doesn’t draw conclusions like “so I’m an unbeliever” or “so I’d better keep pretending to love and believe in God,” or anything like that. That’s what he would have done if he had intended the words “I don’t love God” or “I have therefore never believed in God in the biblical sense” to be taken as straightforward statements of accurate self-knowledge.

Instead, I think these lines are best understood as expressing deep discouragement, a kind of depression or despair over what he found in his own soul and heart when he engaged in introspection. Wesley was overall a pretty upbeat personality, so it’s actually a little bit reassuring to know that he also occasionally struggled with discouragement.

In June of 1766 John Wesley had several reasons to be discouraged: he was just coming back from a pretty unsuccessful ministry trip to Scotland; his marital difficulties were at their worst; his brother Charles was beginning to settle into a less active role in their partnership in the work of revival; and the lunatic fringe of the Methodist movement was demanding more of John’s attention even as the mainstream Church of England continued to remain stubbornly unawakened. Trouble on every side. Ken Collins, while noting that this letter is an “obscure and unrepresentative passage,” also calls it “very dark though remarkably honest.”

The fact that Wesley could look at his own heart and confess such despair –again, privately, to one of his most trusted lifelong partners in ministry, in shorthand– means that he must have been putting his confidence of salvation somewhere else. This is indeed good news: one of the criticisms people often have of Wesley is that he trusted his own inner emotional states for assurance of salvation; a kind of “justification by feelings” (as Pusey famously remarked).

The evidence of this letter says otherwise: a John Wesley who trusted his gut for salvation would have been no believer at all. What John Wesley trusted was the promise of Christ. His emotional life had its ups and downs, but he wasn’t justified or condemned by that. As Albert Outler says about this very letter, “as swiftly as the shutters of an anxious heart in crisis open, they close again,” as Wesley moves immediately to describing the work of ministry that he was “borne along” by.

Historian Charles Goodwin once cited this passage as evidence of Wesley’s “consciousness that God uses unworthy people to produce good work on His behalf,” concluding that “Wesley numbered himself among such unworthy people.” Anybody who could look down into the pit of his heart and ask “Where is the love? Where is the faith, in the sense that the Bible speaks of faith?” is not likely to consider themselves worthy to be used by God for a great work.

Anglican theologian Rowan Williams even went so far as to call this letter of John Wesley a set of “moving and sobering words: perhaps the most eloquent account in our language of justification by faith.” (see Open to Judgment, p. 202). Perhaps that’s saying a bit too much! And more than Wesley would say out loud. But you see his point.