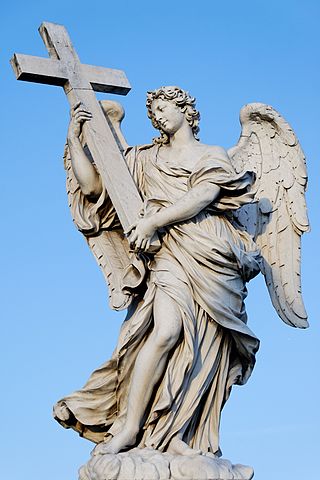 One of the better views of St. Peter’s Basilica in Rome is from the Ponte Sant’Angelo, a beautiful bridge lined with statues of angels, each bearing some token of the passion of Jesus—the cross, the nails, the crown of thorns, the spear upon which he was given vinegar to drink, the pedestal supporting him as he was whipped…. But what do the angels have to do with the passion of Christ? Why do they cherish the tokens of Christ’s passion?

As it turns out, the theologians and artists of the church over the centuries have reflected on this question with surprising results, coming up with several ways that the work of Christ had a significant bearing on the unfallen angels.

One of the most familiar lines of thought, initiated by Origen, cemented by Augustine, and popularized by Anselm, is the idea that Christ, by saving us, repopulated the heavenly city partially emptied by the fallen angels. While this has significant bearing on the lives of the saved, it likewise touches on the experience of unfallen angels, for a repopulated city fills them with delight, confirms their experience of the faithfulness and sovereignty of God, and furthers their vocation of worship by the refilling of their ranks.

A less familiar reflection (found in Donne, Edwards, and Owen, among others) considers the work of Christ as confirming the angels (the point at which they became unable to fall into sin, such as we will be in heaven). Catholic thought tended to follow Augustine, considering the angels as being confirmed in their relation to God at the time that the other angels fell. Protestant thought, however, has developed the idea that the death and resurrection was the culminating trial of the angels, as they fought to cling to God in faith despite and amidst the shocking events they witnessed. Their standing firm through this trial was their final confirmation among the blessed.

A third trajectory (found in Calvin, Edwards and Barth) explores the effect of Christ’s resurrection and ascension to the right hand of God being one that brings order and justice not only to humankind, but the cosmos as a whole, as order is returned and things are put to rights. But the angels, who in Scripture are bound up with cosmic order, surely experience this as a salvation—not from their sin, but from the experience of a disordered world.

The answer of the church, in other words, has been a rich and diverse “Yes!” to the question of whether Christ died for the angels, and it is altogether fitting that theologians and artists have explored this theme. Though the angels themselves did not sin, as part of God’s creation they also had need of being saved from the pervasive consequences sin. Contemplating this fact brings forcefully to mind the cosmic effects of the work of Christ which include our own struggle with sin and mortality, but extend far beyond it. Christ died and rose again to save God’s whole creative project.

I have developed this theme of angels and the atonement at greater length in Chapter 6 of my forthcoming Atonement: Guide for the Perplexed.