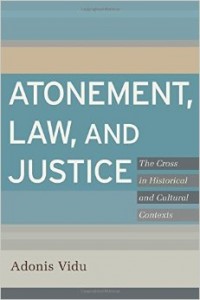 Vidu’s recent book is worth a careful read for two substantial developments. In the first five chapters, Vidu traces the inter-relationship between the atonement (specifically focused on penal substitution) and understandings of law throughout history, starting a fruitful inter-disciplinary discussion. This approach is valuable for several reasons. Primarily, though, it highlights the different understandings of justice throughout history, including the history of the church—a move that demands new levels of sensitivity, awareness and creativity from proponents of penal substitution, given its inherent dependence upon categories of law and justice.

The final chapter offers a creative approach to the questions and tensions brought out in the first part of the book, by means of a sustained development of the doctrine of divine simplicity and its implications for the atonement. Vidu cuts beneath various debates, getting to the root of the relation between God and his character and God and his acts through divine simplicity. In doing so, he develops a number of theses which provide careful safeguards for how we speak of the relationship between Father and Son, Death and Resurrection, and mercy and justice.

I do have questions and concerns about the first five chapters. But the concluding chapter undoubtedly made the book with reading, for it shapes the landscape of atonement discussions by means of careful reflection on the doctrine of God—an extremely valuable and timely contribution. In retrospect, my concerns about the first part of the book are less substantial than I thought. Nevertheless, in an effort of full disclosure:

1) At first I was disconcerted by the lack of primary source interaction (Vidu cites secondary sources on figures such as Augustine and Anselm more than he does the books by Augustine and Anselm). Overall, however, I find Vidu to be sufficiently careful in his readings of the history of the doctrine, though the tendency to use secondary rather than primary sources is troubling.

2) More problematic, I think, was the attempt to engage the history of the atonement from the standpoint of law and justice—a move that ran against the grain in the first chapter (leading to the dubious emphasis on Augustine rather than Athanasius or Irenaeus), and led to a stronger engagement with justice rather than honor in Anselm in the second chapter. I am just not convinced, as Vidu seems to be, that “all atonement theories want to affirm that God preserves his justice in the process of redemption” (p. xv). It seems clear that many theologians have developed the work of Christ either independently or without primary reference to the justice of God.

3) I would not describe this book as a “critical reading of the history of atonement theories” (p. xiv)—the scope of the book was really much more narrow than that.