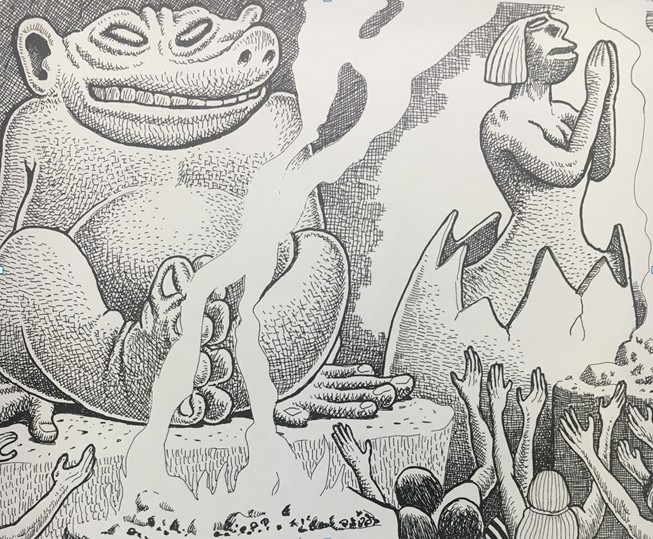 Idols as imagined by Basil Wolverton

This week I got to discuss 1 and 2 Kings with Torrey students. Our sessions were full of surprises (at least for me), and I’m just going to jot down a couple of things I noticed in the course of our conversations.

Manasseh was a bad king. After the split into northern and southern kingdoms, Israel (the northern kingdom) had an unrelenting run of rotten rulers. But Manasseh was so bad that the narrator tells us that during his 55-year reign “Manasseh led [Israel] astray to do more evil than the nations had done whom the LORD destroyed before the people of Israel.” (2 Kings 21:9). And the prophets declare that his abominations included “things more evil than all that the Amorites did, who were before him.” (2 Kings 21:11)

What were these terrible things the Amorites did, that Manasseh did even worse than? Later Jewish speculation lists all sorts of awful things, and “the ways of the Amorites” has passed into folklore to become synonymous with black magic and devil worship. And 2 Kings records that Manasseh “built altars for all the host of heaven in the two courts of the house of the LORD… and he burned his son as an offering and used fortune-telling and omens and dealt with mediums and necromancers.” But the earliest mention of their ways in the Bible is a passing reference in Genesis 15:16, where God tells Abram that his descendants will not come into the promised land until 400 years have elapsed, “for the iniquity of the Amorites is not yet complete.”

That phrase suggests that the God of Israel was keeping an eye on those Amorite tribes in the land, observing their conduct as they heated up to the boiling point. This suggestion has always helped me grasp why God displaced the Amorites: they weren’t just collateral damage cluttering up the land he’d promised to his chosen people. No, they had their own independent account to keep with God. For all we know, he raised up prophets and goaded them toward true religion. But at some point, at just the right time to dovetail with his plans for Israel, they reached peak abomination and were removed from the land.

So when Manasseh’s idolatries are “more evil than all that the Amorites did,” that calls into question the whole presence of Israel in the land. It’s as if God has a special plan for this piece of turf: the Amorites polluted it, so God removed them and brought Israel into it. But when Israel polluted it up to and beyond Amorite levels, in came Babylon to remove Israel form it.

In 2 Kings 24, this connection is made explicit: when Israel is invaded, the narrator says, “surely this came upon Judah at the command o the LORD, to remove them out of his sight, for the sins of Manasseh, according to all that he had done.” The exile itself, removal from the land, seems to be triggered by Manasseh’s Amorite-like blasphemies. The exile is a kind of reverse Exodus, taking the people out of the promised land and returning them to foreign lands as servants.

Amorite worship is apparently a ticket out of the promised land, for Amorites as well as for Israelites.