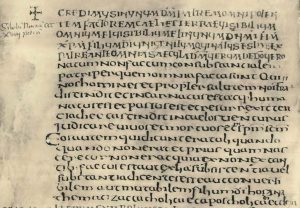 I think this is another example of what I view as a long and healthy tradition in Christian theology. The tradition I have in mind is the one in which the main lines of the Christian confession are established first without a focus on the Holy Spirit, and nothing goes wrong. But when, in a later move, reflection on the Spirit is added to those main lines, a world of greater depth opens up, and the full glory of trinitarian soteriology shines forth. Nothing changes, but everything is better. Let me show this by a few key examples:

1. The Creed of Nicea, in 325, labored to say the right thing about the relation of the Son to the Father. At the end of the creed, having elaborately affirmed that they believe in the Son, the fathers of Nicaea added the unimpressive phrase, “and in the Holy Spirit.” Period. Well, actually some more anathemas of those who get their Christology wrong. Fifty-six turbulent years later when this creed was retrieved and expanded at Constantinople 381, this paltry third article blossomed forth into the confession we recite in the Nicene Creed today: I believe in the Holy Spirit, the Lord and giver of life, who proceeds from the Father, who is worshiped and glorified together with the Father and the Son, who spoke through the prophets. What shall we say happened when the creed of nicea, with minimal explicit pneumatology, added the rich pneumatology of 381? Trinitarianism came into its own. More truth was declared. The whole statement became richer, fuller, deeper. You might say the fathers of Constantinople took a step back. It might be worth saying here that the movement I am describing only works if there is some pneumatology in the first step; I won’t provide any examples of theology that altogether omit any recognition of the Spirt. These would be harder cases; they might run afoul of orthodoxy or of correctness. You can’t say nothing about the Spirit. What I’m drawing attention to is the tradition of initially saying little about the Spirit, and then later saying much.

2. A parallel development can be seen in one of the greatest pro-Nicene fathers, Athanasius of Alexandria. Most of his theology is a relentless hammering home of the Nicene recognition of the full deity of the Son, consubstantial with the Father. He only occasionally mentions the Holy Spirit, and never as a focus of attention in his own right. Athanasius had message discipline, and the message was, Arianism is false. But then, at the request of Serapion of Thmuis, Athanasius wrote a series of letters explaining the person and work of the Holy Spirit, which amount to a brief treatise so powerful and integrated that it is hard to believe Athanasius had held all that understanding about the Spirit subliminally in his mind throughout the Arian crisis. What happens when the Christological Athanasius extends his attention to explicit discussion of the Holy Spirit? His work achieves a rounded trinitarian contour that is a wonder to behold. Perhaps contour is the wrong metaphor; the shape and form of Athanasian theology do not change, but drawing out the pneumatological depths transfigures everything he says.

3. The structure of Calvin’s Institutes shows a similar dynamic. For various reasons, Calvin postpones much discussion of the Spirit until book 3, when he asks how the salvation which the Father has worked out in Christ can become ours. His answer is faith, but then he climbs high into the mysterious workings of the Spirit, and expounds a practical pneumatology of magisterial power.

4. Rather than tracing out this tradition in later examples, I want to reach back to the sources and suggest, reverently, that Holy Scripture itself follows a similar pattern in several places. The gospel of Matthew reaches a first climax in chapter 11 when Jesus says that nobody knows the Father except the Son, and vice versa; but reaches a rounded conclusion in 28 when the risen Christ extends that formula to include the third person, the Holy Spirit, whose work he left implicit in chapter 11. John’s gospel likewise expends considerable energy on the dyadic relation of the Word to God, and then of the Father to the Son, before turning sustained attention to the Holy Spirit around chapter 14 or especially 16. In Romans, Paul works out the righteousness of God and the propitiation in Christ before turning his attention fully to the Spirit in chapter 8, in which Romans reaches a doxological and kerygmatic highpoint.

5. To end with the broadest possible gesture at the structure of the entire Economy of Salvation, the Spirit, never absent but often anonymous in the early phases of God’s work, is conspicuous precisely at the fulfillment of God’s promises, when his name and character and distinctive work come into their own and become a matter of proclamation and teaching. Or to say that in a Hortonesque idiom, covenant and eschatology are the main poles of pneumatology.

It’s wrong to neglect the Spirit. But it’s also wrong to belabor pneumatology in a distracting way, or to attempt to lay a pneumatological foundation in the first moves of systematic theology. There is a wise tradition of establishing the main lines of theology before drawing out the implicit pneumatological realities that have undeniably been at work all along. At least in the order of instruction, this seems to be a prudent way of working for pilgrim theologians instructing the church.

In Thomas Goodwin’s book The Knowledge of God the Father and his Son Jesus Christ, Goodwin notes around page 351 that his whole project has a dyadic, not to say binitarian, ring. Goodwin says,

There is a third person in the Godhead, the Spirit of God the Father, and of Christ ; who in my handling the point will fall in, and appear to be that only true God, as well as these other two named.

As it turned out, the Spirit did in fact “fall in” to Goodwin’s later handling, not only in that book but later when he wrote an extended pneumatology. If the Spirit hadn’t fallen in, we would judge Goodwin’s dyadic start differently in retrospect. But he did fall in. My suggestion is that this happens all the time in Christian theology, and that it’s good. Michael Horton is modeling good pedagogical order, and good dogmatic order, in taking care that the Spirit falls into his work later, when he writes a lot of theology during his career, and then writes a pneumatology.