Nobody knows what Mary was doing in her home in Nazareth when the angel Gabriel arrived there from God. Most painters who have made pictures of the scene have shown her reading the Bible or saying her prayers. A few show her at some household task like laundry or mending; I’ve never seen her washing dishes or sweeping.

One of the very early legends about the annunciation says that she was doing her share of a repair job for the veil in the Jerusalem temple. The legend says that 82 young women around Israel were recruited to spin thread of various colors for the veil; Mary was working on the purple and scarlet threads. Actually, at the very moment Gabriel showed up, she was taking a break to fetch some water, and he said to her, “Greetings, O highly favored one, the Lord is with you!” 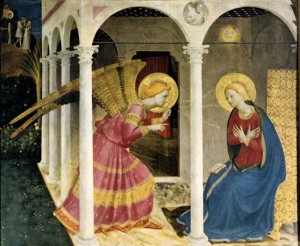 One thing almost all the painters agree about: in this scene, the annunciation, they put Mary on one side of the painting and Gabriel on the other, with a gap between them. Sometimes it’s a large gap, as if Gabriel is shouting from across the room. Sometimes there is architecture between them, like posts or columns or half-walls. And sometimes, if it’s installed in a church, the scene will be depicted on two separate paintings, with the angel on one wall and Mary on another, and actual empty space between the two. The angel’s message has to jump from one two-dimensional plane to another, through a gulf of three-dimensional space.

Gabriel is bringing a message from God, and the message that he brings has to come from far away and leap across a great distance to reach its human hearer. The distance his voice is traveling is the distance between two worlds. A messenger from the kingdom of heaven is declaring the word of God to a daughter of Eve on earth. After all these years, what God the Father has to say is something about his Son.

So when that word comes to earth, it finds a home. “Mary,” says the angel, “you will conceive in your womb and bear a son, and you shall call his name Jesus. He will be great, and will be called the Son of the Most High. And the Lord will give to him the throne of his father David, and he will reign over the house of Jacob forever, and of his kingdom there will be no end.”

The word came across an unimaginable distance, and spoke an unbelievable promise, but the promise is believed. Mary does have a question, but it’s not the serpent’s question that Eve entertained, “has the Lord really said this?” Instead, Mary’s inquiring mind and pondering heart want to know, “how shall this be?” And the angel answers, “The Holy Spirit will come upon you, and the power of the Most High will overshadow you, and the child to be born will be called holy, the Son of God.” And he gives her a sign to prove that not a single word of what God says shall be impossible.

“I am the servant of the Lord,” says Mary, “Let it be to me according to your word.” Mother Mary echoes Father Abraham, and both of them sound like the seed who was promised so long ago; like the Son who will say “Abba, Father, all things are possible for you.”

For my church‘s 2014 Christmas concert service, I wrote a set of 9 readings to accompany the night of songs: a Lessons and Carols service. I’m posting the lessons here at Scriptorium Daily from now until Christmas day. Banner design by Josh Kenfield.