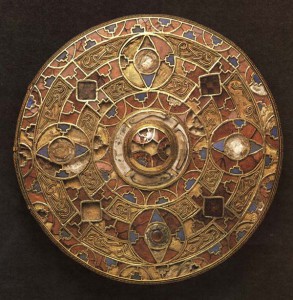 Today (June 2) is the day King Aethelbert of Kent was baptized into the Christian faith by Augustine of Canterbury in the year 597.

Bede tells us that Aethelbert “was the third English king to become High-King (Bretwalda) of all the provinces south of the river Humber, but he was the first to enter the kingdom of heaven.” So for anybody who wants to trace British Christianity back as far as possible, and has the good taste to avert their eyes from Glastonbury, Aethelbert the king and convert is a great and solid starting point.

Bede goes on to say of Aethelbert,

Among the many benefits that his wisdom conferred on the nation, he introduced, with the consent of his counsellors, a code of law framed on the Roman pattern, which was written in English and remains in force to this day. The first of his laws is designed to protect the Church he embraced, and decrees that satisfaction must be made by any person who steals property from the Church, the bishop, or other clergy.

So the origins of written British law go back to the first Christian king of the land. Aethelbert’s big idea seems to have been connecting specific fines to specific crimes; not so much “an eye for an eye” as “that eye will cost you fifty bucks, sir.” That seems pretty British. This ninety-law treatise is one of the first written documents in Anglo-Saxon.

Aethelbert was succeeded by his son, a pagan who went pretty far toward re-paganizing the territories Aethelbert had Christianized.