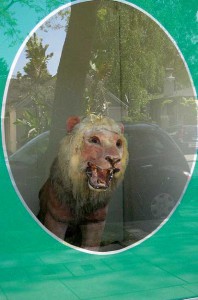 This week my family is visiting friends in Berkeley, California; returning to that strange little city where we lived for four years in the late 90’s and have visited with students every summer since.

Berkeley’s easy to make fun of, but also easy to love. Everybody there cares passionately about what they care about, even if what they care about isn’t worth caring about. The place is so liberal it’s conservative again, hating cars so much that you can walk where you need to go like it’s Mayberry, and hating the evil megastores so much that main street looks quite a bit like it did in the 1950’s. They won’t even take the stuffed lion out of the toy store window when its mane falls out. I’ve tried to put my finger on the Berkeley thing for years, and I just can’t capture it. When I see it, I can say “That is so Berkeley,” which is kind of the unofficial city motto. “So Berkeley” has even spawned a new joke genre recently, the “Your Mom is So Berkeley That…” joke. If it doesn’t sound funny to you, I guess you have to be there. Berkeley is one of the great “be there” places, with its own recognizable culture.

Having failed to name the vibe, I greatly admire Michael Chabon’s 2004 essay, Ode to Berkeley, in which he conjures the spirit of Berkeley pretty accurately. A couple of excerpts to encourage you to click through for the whole thing:

Part of the charm of Berkeley lies in her setting: the shimmer and eucalyptus sting of the hills on a dusty summer afternoon, hills whose rocky bones jut through the skin of Berkeley in odd outcroppings like Indian Rock; the morning fogs of the flatlands along the bay, with their smell of mud and their magically vanishing glimpses of Alcatraz and towers of San Francisco.

But the place is hardly a “community” of anything:

It is a city of potterers and amateur divines, of people so intent on cultivating their own gardens, researching their own theories, following their own bliss, marching to their own drummers and dancing to the tinkling of their own finger-cymbals that they take no notice of one another at all, or would certainly prefer not to, if it could somehow be arranged.

And it’s a hassle to live in, not because of urban density, but because everybody is constantly judging everybody else:

Nowhere else is the individual encumbered with a greater burden of shame and communal disapproval for having intruded, however innocently, on the sensibilities of another. Berkeley’s streets, though a rational 19th century grid underlies them, are a speed-busting tangle of artificial dead ends, obligatory left turns, and deliberately tortuous obstacle-course barriers known as chicanes, put in place to protect children – – who are never (God forbid!) sent to play outside.