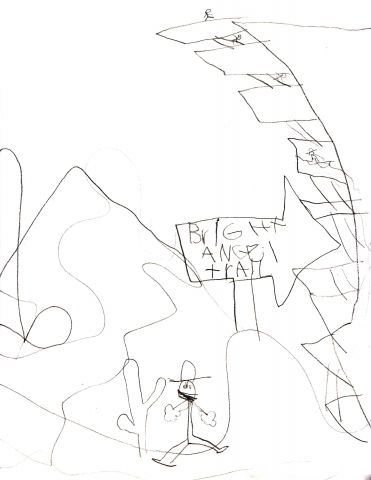 Freddy Age Seven turns his attention to the Brighty mythos, and decides that no straightforward illustration can capture it. Instead he approaches this epic with an entire suite of artistic approaches. His first attempt at communicating the power of Marguerite Henry’s Brighty of the Grand Canyon makes the Grand Canyon itself the star of the tale. Bad Man Jake Irons can be identified easily enough, but the overall image dissolves into a tangled interplay of wavy lines. Canyon wall becomes trail edge becomes cactus becomes layered stone becomes rising mirage… one signpost points the way to bright angel trail, a zig-zag of outcropping steps which climb the right border of the image. Tiny figures can be seen on the trail. Brighty himself, intrepid burro, is nowhere in sight.

So much for atmosphere. It’s important, but it is not everything. For his next attempt to scale the sheer face of the Brighty mythos, Freddy Age Seven depicts, in a semi-allegorical manner, the main characters of the tale. This is no snapshot, because these characters could not possibly be together in this configuration during the course of the book. The artist has telescoped the chronology in order to depict the fundamental meaning of these characters and their relationships. 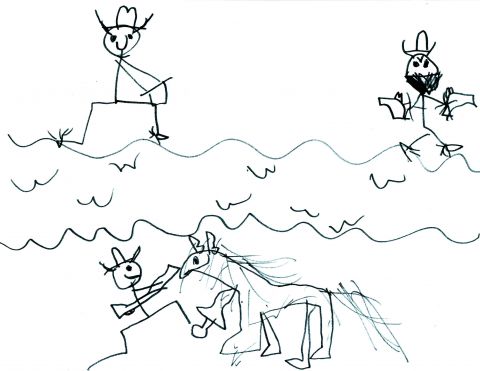 Once again, the inanimate element takes the center of attention in this drawing: a river runs through it. The river, well stocked with W fish (waves), makes a strong horizontal division between the upper and lower zones. In the lower zone, Brighty has a moment of communion with Uncle Jim. Brighty has a bell around his neck. Wild pen lies pick up the texture of a wild winter coat on a feral burro. That’s one fuzzy donkey! Uncle Jim holds across his lap his prized rifle, given to him by Teddy Roosevelt in gratitude for Uncle Jim being such a swell guy, taking him on a mountain lion hunt, and showing much other exemplary stewardship and hospitality.

Above the river, to the left, is a prospector panning for gold, wearing spurs. This is Old Timer, the archetypal human friend of the wild animal. 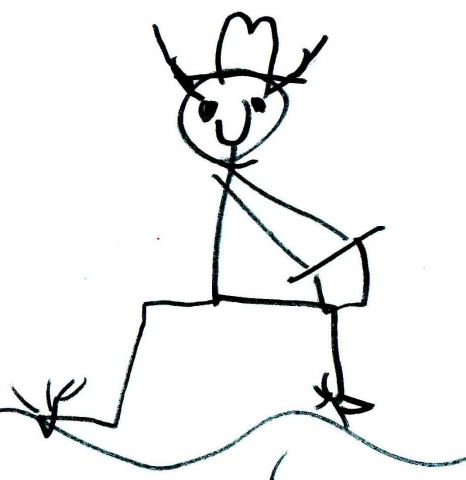 Opposite him, sharing that zone of visual space above the line of the river, is the archetypal enemy of man and beast, Jake (the Snake) Irons. He’s packing twin pistolas, and covering his face with a bandanna disguise. A veritable force of corrupted nature, Jake careens through the book leaving destruction and brokenness in his path. 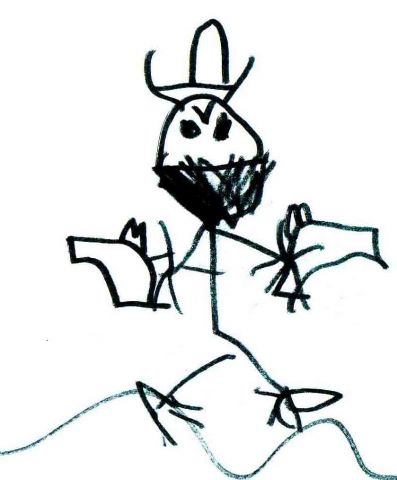 Jake and Old Timer are isolated above the river not just as archetypes of good and evil, but also because in the book they have a direct confrontation in secret. With nobody watching, Jake finds Old Timer succeeding at his prospecting work. Jake’s nature is fully revealed in this confrontation: he is a murderous claim jumper! Old Timer’s blood cries out from the ground and does not go unheard.

Jake wears the cowboy hat characteristic of this drawing: it begins as a normal bowler and then has a strongly curved brim added to it after the fact. Old Timer’s, however, has more of an M shape.

Phoebe Age Five joins Freddy Age Seven to conclude this homage to Brighty with something appropriately moralizing and didactic: