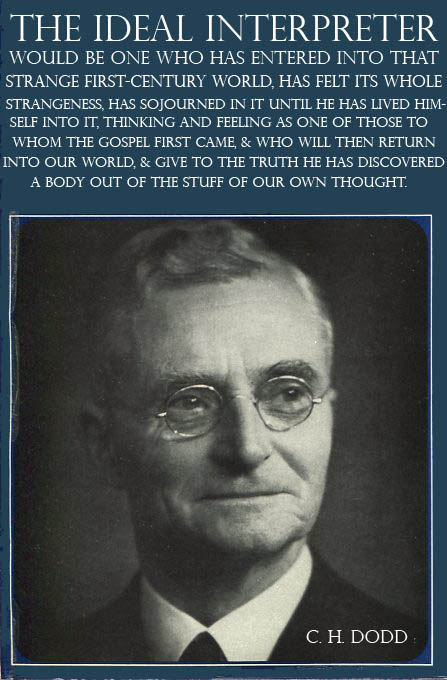 C. H. Dodd (born this day, April 7, 1884; died 1973) was a major twentieth-century New Testament scholar. He wrote on many topics, but his name is mostly associated with the idea of realized eschatology.

If eschatology is the doctrine of the final things (eschaton being the Greek word for “last”), then realized eschatology is the teaching that those final things have already happened. Realized eschatology replaces “the end is near” with “the end is here,” and Dodd argued that we should understand Jesus’ message that “the kingdom of God is at hand” with an emphasis on the kingdom’s actual, absolute presence: “The kingdom of God is right here, at hand, at your fingertips, reach out and you’re touching it.” Dodd coined the term “realized eschatology,” and he is the scholar who took hold of the idea and ran it as far as it could go. In fact, he ran it quite a bit further than it could go, reaching conclusions that few could follow him in, and that he himself had to qualify and nuance in later years.

But there is much to be said in favor of a little bit of realized eschatology. Jesus knew that in the prophetic vision of the Bible, certain things were going to happen at the end of the world:

As the New Testament makes clear, these things all happened in the ministry of Jesus himself: He was the expected Messiah, his cross was the place of God’s judgment on the sins of the world, he rose from the dead as the firstfruits of the general resurrection, he was raised to the right hand of the majesty on high, and he poured out the Spirit on the basis of his finished work.

In the Revelation, Christ identifies himself as the first and the last, the protos and the eschatos. Just as he said, “I am the resurrection,” Christ can legitimately say, “I am eschatology” or “eschatology is realized in me.”

So realized eschatology is a great conceptual tool for understanding what’s happening in the New Testament. But it’s not enough, and Dodd’s theology came under some deserved attack for being one-sided. Realized eschatology has to be kept in constant, creative tension with future eschatology. In New Testament terms, “this Jesus, who was taken up from you into heaven, will come in the same way as you saw him go into heaven” (Acts 1:11). Jesus may be the eschatological man, but that doesn’t mean his eschatological work was complete in AD 33, AD 70, or last year.

If all you can say about eschatology is that it was realized in Christ’s life, death, and resurrection, you have nothing to say about our future. Inevitably this will lead to confusion of terminology (the end of the world was 2,000 years ago, the future is in the past, etc.) and will require you to ignore the unfulfilled prophecies of the Old Testament and the futurist passages of the New Testament –or at least offer gymnastically contorted reinterpretations of them. The first coming of Christ was eschatological, but the second coming will be more completely eschatological… eschatologically eschatological!

But Dodd put the whole category of realized eschatology on the map of twentieth-century theology in a very helpful way, and as later scholars came to term with his arguments, they tended to balance his one-sidedness by integrating more of the full biblical witness. George Eldon Ladd was probably the most influential voice for evangelicals in coming to terms with the tension between realized eschatology (a biblical idea) and futurist eschatology (also a biblical idea). If “realized eschatology” is the slogan for Dodd, then Ladd’s slogan was something like “already / not yet.” The biblical tension between already (Christ brought the final things in his own person and work) and the not yet (this world shows all the expected signs of unredeemedness, and we await the return of Christ) is pervasive. In some ways, this clear biblical tension is so much a part of the intellectual furniture of evangelicalism that we’ve had Dove-award-winning pop songs about it since the 80s, and Russell Moore has shown how it serves as a consensus position for united social engagement.

As for C. H. Dodd, who did justice to the realized eschatology side of things, his own scholarship did occasionally suffer from its one-sidedness. If eschatology is over and done with, then when we pray “thy kingdom come,” all we can really mean is “may your kingship be manifested in my life.” That is a great prayer, and people like Dallas Willard have been eloquent about how transforming it is for Christian life to acknowledge the reign of God here and now. But without the counterweight of a future kingdom of God, this “present reign of God” theology can be privatized. That’s certainly what happened in the wake of Dodd: The message of Jesus could easily be transformed into the message of Bultmann, a call for ultimate existential decision. In complex ways, his thought was folded into the English-language neo-orthodoxy that dominated mainline theology for the middle of the twentieth century, enabling academic theologians to hold on to Christian confession in the face of liberal denials, but limiting their ability to make much headway. Seminarians of that era were uniformly amused by the great commandment of Anglophone neo-orthodoxy: “Thou shalt love the lord thy Dodd . . . and thy Niebuhr as thyself.”

And as long as I’m reporting jokes based on what his name rhymed with, here’s a limerick that circulated for a while:

There was a professor called Dodd,
Whose name was exceedingly odd;
He spelled, if you please,
His name with three “D’s,”
When one was sufficient for God.

To an evangelical reader in the twenty-first century, Dodd’s work can seem like soft semi-liberalism. But thinking about his place in the whole history of twentieth-century biblical studies is instructive.  F. F. Bruce, who praised Dodd as having ” a brilliant intellect, a sober judgment and (not least) a reverent humility,” offers the best brief account of where Dodd fits:

His earliest writings reflect something of the climate of theological liberalism in which he was brought up. It would be inaccurate to say that his later writings reflect a different climate; they helped to create a different climate. For Professor Dodd was a leading pioneer in the “Biblical theology” movement; indeed, so far as Britain is concerned, he might justly be called the pioneer.