When I lecture on christology, I often use an illustration that I call the Chalcedonian Box. It’s a diagram that emphasizes the theological boundaries around the mystery of the incarnation. As a visual aid, the box is easy to sketch on the spot (on blackboard, whiteboard, or flipchart paper). It’s also easy to build up in PowerPoint, Prezi, and other presentation software.

Here’s how it works: 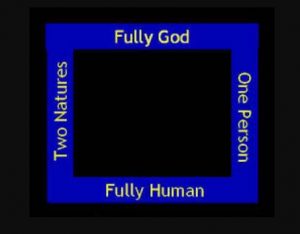 To confess the full truth about Jesus Christ as God incarnate, you need to affirm his full divinity (top line) and full humanity (bottom line). You also want to affirm that this person, fully divine and fully human, is one person (right line) existing in two natures (left line). The organizational schema of a box provides a strong sense of completeness without suggesting some kind of absolute theological perfection: while drawing it, I remind the audience that we’re not putting God in a box (bad), but reminding ourselves where the proven guidelines of orthodoxy are (good).

I’ve used this device often and with various audiences, and I published a version of it in the 2007 book Jesus in Trinitarian Perspective. I originally came up it when I first started teaching on christology in the late 1990s.

I have two reasons for asking. First, the box has always seemed self-evident and obvious to me. I definitely remember struggling to grasp the subject matter of christology when I was studying it, but as soon as I began thinking about how to teach what I had learned, the box diagram suggested itself almost automatically.

And second, I got a surprising e-mail this month from another theologian who also invented the box!

David MacLeod is Professor Emeritus of Bible and Theology at Emmaus Bible College in Dubuque, Iowa. He e-mailed me recently to say he had seen the Chalcedonian Box in my chapter in Jesus in Trinitarian Perspective. “It piqued my curiosity,” he wrote. “Let me explain.” And he did: 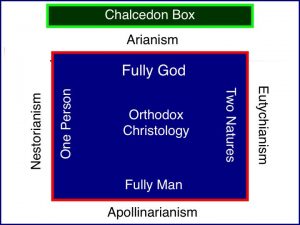 When I taught Christology here at Emmaus (1980s-90s) I drew the attached chart and eventually included it in a PowerPoint presentation. Over the years I have given permission to colleagues to use it. Assuming it was original, they have always credited it to me. I have no copyright on the chart, and I’ve always been happy for others to use it and other class notes of mine. The idea for the chart came to me while reading Shedd’s History of Christian Doctrine (vol. 1, p. 392). He notes that all heresies arise when one or more of the four concepts (true deity, true humanity, the union of deity and humanity in one person, and the two natures, i.e., the distinction of deity from humanity, in the one Person, so that there be no mixture of natures) were rejected.

As you can see, his diagram is strikingly similar to mine. Even allowing for the homogenizing effect of PowerPoint’s default settings (same color blue, same font, etc), it’s really remarkable. Dr. MacLeod summed it up this way:

You and I have the same chart. Is this (1) a happy coincidence? or (2) Did we both take it from a common source? or (3) Did you get it from a friend/student of mine?

I can definitely rule out option (3), just as Dr. MacLeod can rule it out in reverse: there’s no evidence that either of us saw each other’s charts. Option (2) is worth considering, though. Dr. MacLeod was reading Shedd when he devised his Chalcedon Box. What was I reading at that time?

I came up with the box around 1998 while teaching a theology course at Westminster House in Berkeley, CA.¹ That course was the first time I used the ecumenical councils as my teaching outline for christology. Once I decided to use the councils, I did two things: I associated one key doctrine with each council (Nicaea = fully God; Constantinople = fully human, etc.) and then arranged them to show how the questions of orthodoxy were getting more precise, ruling out all the major errors while leaving open a broad field of orthodoxy. The big strategic decision was to use the material of historical theology as the framework for teaching systematic theology.

I may have picked up that notion of a bounded field from Bonhoeffer’s Christ the Center (which really struck me when I first read it in 1993). But the idea of putting “fully God” at the top and “fully man” at the bottom probably came directly from Campus Crusade’s “Four Spiritual Laws” tract, with the cross bridging the distance from God to man. The students who registered for my christology class were mostly involved in Campus Crusade; possibly I was pitching at them. 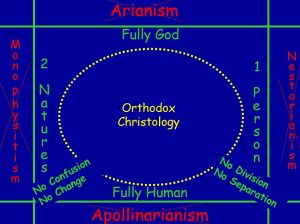 For the longer version of my christology lectures, I piled on a few more labels: beyond each border I named the heresy excluded; at he left and right I wrote in the Chalcedonian negations (no confusion, no division, etc.). It got more complicated, but that was an advantage if you were going to keep coming back to the same chart over and over.

What was I reading at that time? Not Shedd. On historical christology I was reading a lot of Aloys Grillmeier and Vladimir Lossky, along with Turretin, Heppe, and Chemnitz. I worked through a number of popular-level intros to the councils. Because I was in a PhD program in systematics, I was reading a lot of Pannenberg, Rahner, and Schillebeeckx. Really just anything I could get my hands on that gave me clues about conciliar christology. 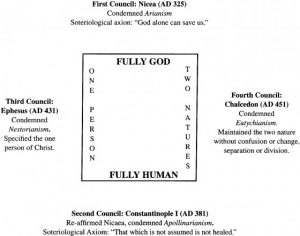 Once I got the lecture series sorted out, I used it over and over. After coming to Biola, I taught from it in courses, in churches, and at apologetics gatherings. I found I could set the depth at various levels, adjusting it to the audience’s needs and wants. Eventually I published a version of the Chalcedonian Box in Jesus in Trinitarian Perspective, where Dr. MacLeod saw it. In that version I included two soteriological axioms for the two nature of Christ, drawn from Athanasius and Gregory of Nazianzus respecitvely: “God alone can save us” and “that which is not assumed is not healed.”

In short, I don’t see any common sources between my reading Dr. MacLeod’s. And that leaves us to account for the similarity by option (a), happy coincidence.

David MacLeod tells me he hopes to publish a theology in due course, and will use the Chalcedonian Box in his christology section. “I would like to credit the original artist, which I have assumed for years to be me,” he says. “As things stand, I would be compelled to credit you in that you have published it first.”  But it looks to me like we both invented the Chalcedonian Box separately, following the same basic  ideas without using the same proximate sources. He probably taught it first, though I published it first.

After the initial surprise of learning that somebody else also invented my visual aid, I felt a sense of confirmation: perhaps we both invented it because it really emerges from the source material, or because it’s true, useful, and pedagogically apt.

¹It’s still hard to believe, but the first theology course I ever taught was at U.C. Berkeley, through the DE-Cal program, a democratic education experiment that grew out of the free speech movement. I taught a course on the christology of the ecumenical councils, as a PhD candidate, to students in Cru for Cal credit.