Charles M. Stang, Apophasis and Pseudonymity in Dionysius the Areopagite: “No Longer I” (Oxford: OUP, 2012) (review copy courtesy of OUP) 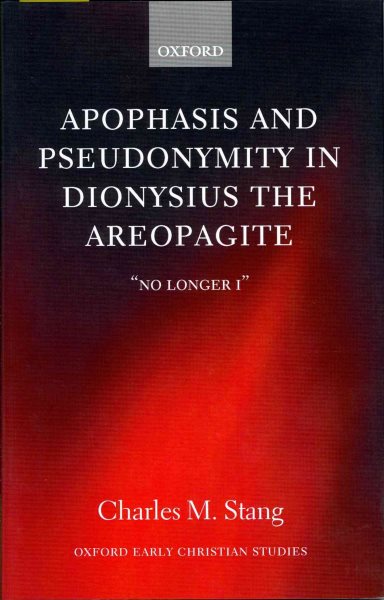 This is my kind of radical thesis–that that most exotic of Christian writers, Dionysius the Areopagite, is really, deep-down, Pauline.

What makes things better is that the one putting forth the thesis, Harvard’s Charles Stang, knows what he’s doing. He knows the implications of such a claim, and he makes it carefully, confidently and conclusively, all without overindulging in apologetic haranguing.

But let me back up… Who? Well, you know, that disciple of Paul’s, the Athenian judge converted following the apostle’s speech at the Areopagus. Paul gave a rare gem of a speech, chock full of Greek citation and allusion, in which he proclaimed to these worshippers of an unknown God that that God had created everything, was the one in whom we live and the one who had raised Jesus from the dead and appointed him judge of all. Some of them thought it was hogwash (seriously? a resurrection?!). Others wanted to talk again. ‘But some men joined him and believed, among whom also were Dionysius the Areopagite and a woman named Damaris and others with them.’ (Acts 17:34)

Trouble is, in the 19th century, in which the acids of criticism were applied to just about everything, we realized that the dizzying texts of this purported Areopagite were phony. I mean, the guy pretty much cuts and pastes from Proclus left and right. He tips his hat to christological controversies raging centuries after Christ. And his ecclesiology is hardly the rough-and-ready all-things-in-common fellowship of the early church, but a much more elaborate (and elaborated) edifice. Turns out, in fact, that this guy was probably a 6th-century Syrian monk, earning him the scholarly snub ‘Pseudo-‘.

But, so Stang, those scholars who dismiss Denys (the shortest form of his name, fit for a blog) as an impostor, a liar, or at best a pious writer eager to earn himself a hearing and fashion for himself legitimacy–well, those scholars miss the point entirely. And they do so in two ways. First, they set up a zero-sum game in which Denys can be a Platonist or a Christian, but not both (or at least not with any integrity). Perhaps he hides behind the pseudonym to smuggle in a dubious Platonism, a Trojan horse. Luther complained that Denys was more Platonist than Christian, and he critique is far from idiosyncratic. Both the form and matter of Denys’ writings suggest a Platonist milieu. But Stang argues convincingly that Denys is neither subversively Platonist nor merely accidentally so. Rather, he follows the lead of his spiritual father, Paul, in appealing to ‘the incipient faith of pagan wisdom’ and uttering ‘a plaintive call: return home from self-imposed exile.’ The wisdom of the pagans is a prodigal son ‘whom the father welcomes home, despite the disfiguring filth from years of toil in exile.’ (199)

The second misstep comes when scholars wrongly assume that pseudonymity suggests dubious misdirection, when for Denys it is an act of discipleship. By assuming the identity of Paul’s disciple, Denys becomes a disciple of the disciple and a disciple of Paul. This trades on a belief in a ‘timeless communion’ with saints from the past and a ‘telescoping’ of time that generates contemporaneity with them. More specifically, pseudonymous writing is an ascetic and apophatic act, in which the writer empties himself and ‘unknows’ himself, precisely that he might become full of the unknown God. We might think of pseudonymous writing for the Christian as an act whereby the writer experiences a doubling, such that (in this case) he is both 6th-century Syrian monk and 1st-century Athenian judge, a doubling which makes room for Christ. Paul exhorts people to imitate him even as he imitates Christ (1 Cor. 11:1). ‘And Paul, by his own admission in Gal 2:20, is already doubled: he is both Paul and Christ. Only through the apophasis, but not the denial, of the single self–what Paul calls the “I”–only through unknowing oneself, can one clear space in the self for the indwelling of the other.’ (204-5)

It might be strange to find the indwelling Christ at the heart of Denys’ thought. He comes under attack in modern times for an underdeveloped Christology, but ‘never once does an early reader accuse Dionysius of lacking a sufficient Christology.’ (92) God works ‘deification through cooperation’ in and through the celestial and ecclesiastical hierarchies (82). ‘For Dionysius the hierarchies communicate light and love.’ And it is Paul who has taught him that Jesus is ‘both light and love and “access” to the hierarchies.’ The hierarchies, then, communicate Jesus, and in so doing purify, illumine and perfect the believer. Stang goes so far as to find in Paul’s encounter with the ‘luminous Christ’ on the Damascus Road a paradigmatic religious experience in which one knows beyond knowing, being blinded by the light of Christ (93).

Even the God revealed in Christ, then, is known only beyond knowing. While not a translation I find convincing, Stang offers what is nevertheless a thoroughly Dionysian gloss in his rendering of Acts 17:23: ‘That which you therefore worship through unknowing, this I proclaim to you.’ (118) The ceaseless naming and unnaming of God involves us in ‘a very demanding regimen’, whereby we continually die to our ideas of God. Stang argues ‘that negative theology–often figured as a speculative and rarefied theory regarding the transcendence of God–is in fact best understood as a kind of asceticism, a devotional practice aiming for the total transformation of the Christian subject.’ (4) Denys’ program of perpetually affirming and negating names and concepts for God aims ‘to solicit a certain event, namely deifying union with God.’ (136) ‘Eros is the engine of apophasis, a yearning that stretches language to the point that it breaks, stretches the lover to the point that he splits.’ (169-70)

And so our love for God means that ‘we strip ourselves as bare as we strip God, shedding our most cherished faculties and identities.’ (195) We unknow not only God but ourselves, and the unknowing of the self is tied closely to the giving up of ‘possession of the immutable, stable, sober self’. This makes Paul ‘the exemplary madman’, though we might as easily speak of him as the exemplar of faith (186). ‘I am beside myself’, writes Paul (2 Cor. 5:13) such that it is no longer I who live, but Christ lives in me (Gal. 2:20).