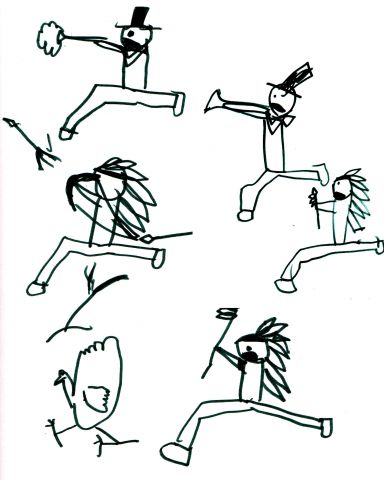 At first glance, I took it for a battle between pilgrims (tall black hats, blunderbusses) and indians (feathered headdresses, tomahawks, bows and arrows). But upon closer examination, neither side is clearly chasing the other. Everybody’s running to the left, firing bullets and arrows indiscriminately. If anything, the indian at left and center is in great danger of a “friendly fire” injury in the form of an arrow to the rump. So a pilgrim-indian fight doesn’t make sense, especially since we’ve been discussing all the standard patriotic fare about the origins of Thanksgiving.

And then I noticed the figure on the lower left: The turkey. What we are witnessing is a common hunt between the settlers and the indigenous people, pursuing the turkey.

And what a turkey! Look closely at the restrained, calligraphic lines out of which he is constructed. Children are often taught the neat trick of drawing turkeys by tracing their own hands, and this turkey bears some marks of being descended from such chiromorphic specimens of Meleagris gallopavo. 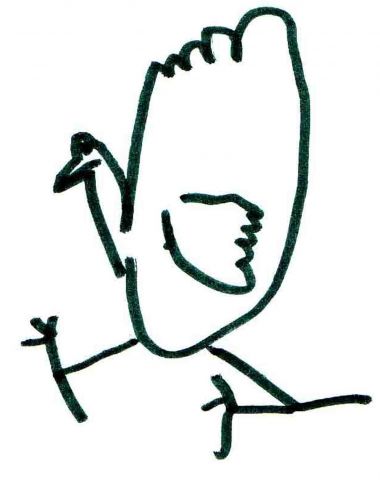 His basic body shape is more like a baby’s foot than a child’s hand, though. Attend closely to the exact shape of that bird’s outline, then turn your eyes to his wing. It is the exact same shape, rotated ninety degrees. One sign of an accomplished artist is that he will repeat basic shapes to strengthen and unify his composition. With the duplicated baby-foot, Freddy Age Seven “shows his hand” especially clearly, but the repetition of simple forms is what this thanksgiving image is all about. From the striking similarity of the turkey’s two feet to the fact that every human is running with the same leg-extended posture, this is a drawing unified by the rich pattern of seeing the same thing different, over and over.