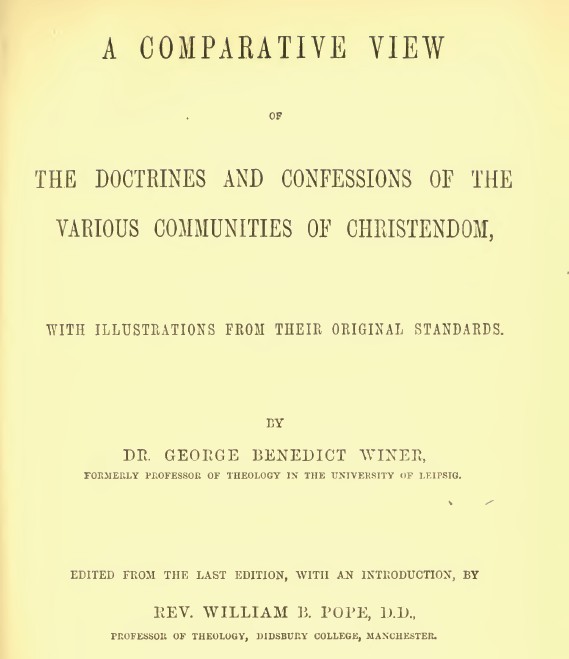 Here’s a resource I recommend for teaching theology: George Benedict Winer’s Comparative View of the Doctrines and Confessions of the Various Communities of Christendom.  It’s from the nineteenth century, so it’s public domain, and you can read the original German edition here,  and the English translation here.

The whole book is interesting, but I’d especially like to draw your attention to the chart at the end, where Winer instructively condenses his findings. Here is a .pdf of the pages of the book containing Winer’s original chart: GB Winer Tables of Comparative Theology; and here is a version of it I cleaned up for classroom use: GB Winer Comparative Theology Handout.

I first encountered Winer’s comparative dogmatics because it was translated and edited by William Burt Pope, a theologian who prepared himself for his own important constructive doctrinal work by choosing a few strategic translation projects (mainly German biblical commentaries by Stier, Ebrard, and Haupt). He gave the English-speaking world access to Winer’s book behind a 70-page (!) introduction that is so spirited and independent-minded that it is really a small book on comparative dogmatics in its own right.

(If you just came for the nifty charts, you can stop reading here. Help yourself via the links; you’re welcome.)

As Pope says in his introduction, the “one and ruling principle” of Winer’s Comparative View is “that of letting the standards speak for themselves.” Notice that he is comparing “standards,” not “theologies;” the public confessions of churches rather than the opinions of theologians. Winer is writing in the discipline that used to be called “comparative symbolics,” where “symbolic” has the archaic meaning “creed.” Theologians are important, too, but they don’t fit this project: “The history of doctrine includes thoughts of individual theologians; but symbolics does not.” The Churches that had not organized themselves around written, public confessions of faith are all but ignored.

Following his “ruling principle,” Winer quoted key texts rather than paraphrasing them. The result is a fair representation of each church’s own point of view without any tendentious warping of the report. As Pope says, in Winer’s book ” There is no polemic on the one hand, no harmonizing irenicum on the other.” In Winer’s own introduction, he says that

the scientific exhibition of the doctrinal systems of the several Christian communions has occupied the earnest attention of evangelical theologians from the times of the Reformation. As these theologians, however, mostly wrote under the conviction that they had to maintain a pure confession of the truth of God’s word, their treatment of the opposite doctrine naturally assumed the form of a warfare conducted in God’s name against error.

No doubt Winer would like to “maintain a pure confession of the truth of God’s word,” but in this volume he is primarily concerned to report multiple views accurately.

Pope’s introduction notes that “a word must be said before passing on the Comparative Tables at the end of the volume,” that is, the only part I’m posting here. “They deserve attention as the product of no little thought and skill; in fact, no part of the work made a heavier demand upon the ability of the author.” Pope commends them very highly, but he thinks of them as first steps rather than final decisions. Pope was one of those scholars who was well equipped in all the fields of theology (from biblical studies and historical theology on through to preaching and spirituality), but whose overriding interest was always constructive and systematic. He was always working on the project of teaching doctrine correctly. So charts like this, for Pope, were just the place to start. His long introduction coaches students on how to prepare their own larger, more extensive charts for each of the doctrines, with an eye to showing how all the doctrines relate to each other. That is, Pope was not interested in using the comparative technique just to pigeonhole churches; he used the comparative method to bring out the profile of Christian doctrine itself.

“It would be a fatal mistake,” he warned, to think that an intimate familiarity with tables like these makes a theologian.” The whole design of Winer’s book was “to preclude that supposition.” A book like this “gives only the materials which the intelligent reader must use according to his own discretion and the exercise of his own rightly directed and rightly guarded private judgment.”

To latch onto such charts as the final word is to halt at a very superficial level of theological work. A student who does this “will acquire perhaps a certain expertness in words, but the things that are the soul of these words will remain hidden from him.” Pope goes on at some length about these folks (“the herd of those babblers who in the present day seem to have made Christian dogma the arena, or rather the victim, of their superficial exercitations,” etc.). It’s true that the comparative exercise, as an end in itself, is usually spiritually dangerous. It attracts, and then hardens, critics who crank through five views of everything and are never able to view any single thing steady and whole.

But if you use charts like this to get your bearings on your way to actual doctrinal judgments, they are a great help in focusing on one great doctrine after another. “It would be hard to exaggerate,” Pope says, “the importance of that kind of theological study which makes every cardinal topic in its turn a centre, and brings all other themes to revolve around it. Thus and thus only we see the various bearings and relations of every subject, and come to understand it thoroughly. Indeed it is not possible in any other way to do justice to some of the leading doctrines. ”

Pope sings the praises of the kind of doctrinal insight that a tool of comparison like this can ultimately produce, and the disjointedness from which they can deliver the theologian:

In fact there is nothing that the student of a book like this should have more diligently impressed upon his mind than the necessity of not studying the several subjects of theological science in an isolated manner. This is the manifest evil connected with most of the systems that are commonly adopted. Topic after topic, from Revelation to Judgment, is introduced, discussed, and despatched, often with a special care that it shall return no more.

It was not after this manner that the Christian Church was taught the rudiments of its theology in the New Testament, and on such a principle the truth can never be adequately unfolded in the scientific theology of the Christian Church. What is to be desired and recommended as the perfection of divinity is that in which the freedom of Biblical theology is preserved and harmonized with the results of systematizing art. The bearings of every doctrine on every other doctrine should be indicated at least, that being briefly and subordinately touched upon under one head which takes the leading place under another.