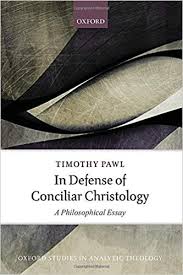 There are several reasons why it might be both valuable and meaningful to speak of an identifiable, single Christology of the ecumenical councils of the ancient church. First let us consider why it might be valuable, and then why meaningful.

It might be valuable to speak of such a Christology in order to indicate that the church enjoyed agreement deep and wide during its foundational or classical period; this might in turn provide a solid basis for a theological consensus that could be widely shared among contemporary theologians and churches.

This value of classical Christology enters into the “Working Assumptions” of Thomas C. Oden’s Systematic Theology, also known as Classic Christianity, who says that his “purpose is to set forth the classical teaching of the person and work of Jesus Christ on which there has generally been substantial agreement between traditions of East and West, Catholic, Protestant, and Orthodox.” Oden says further that in this approach to theology, he “will be listening intently for the ecumenical consensus that has been gratefully celebrated as reliable Christian teaching by believer of widely varied social locations and cultural settings and periods” (ST vol 2, Word of Life, p. x).

For a theologian like Oden, “the prime criterion is consensuality,” (xx) and in his Christology he quotes liberally from the most widely-received authors, and more sparingly from the more controversial. Fully aware of what he is doing, Oden says “readers may be helped by assuming that before each and every paragraph is the hidden phrase, ‘The principal classical exegetes say…’” (xvii). In a project like Oden’s, the emphasis is so much on historical continuity and consensuality that the transition from historical description to contemporary authority is more or less elided. It is valuable to speak of a consensual, conciliar Christology, in other words, because since there was one then, there is one now, and to it we should cleave. As for its contemporary relevance, Oden famously threw himself into it after his late-career intellectual conversion: “If we give it this chance, it will make its own sense to us.” (xiii)

So Oden executed a Christology in which every paragraph presupposed the line, “the principal classical exegetes say…”

But Tim Pawl’s analytic theology essay in Christology begins with the words, “suppose, for argument’s sake, that those councils got things right.” (p. 4) The reason Pawl’s project starts this way is that he is addressing the second criterion mentioned above: the meaningfulness of a conciliar Christology.

Pawl’s book In Defense of Conciliar Christology: A Philosophical Essay (Oxford Studies in Analytic Theology. Oxford University Press, 2016) sets itself the task to take a received body of teaching, which he calls conciliar Christology, and defeat any defeaters that may arise against it. The seven ecumenical councils taught a number of things about Jesus Christ, and those things form a coherent body of teaching which Pawl defines as “the conjunction of all the claims made at these councils concerning the doctrine of the incarnation.” (12) His defense is not any sort of complete proof or demonstration from first principles, but a double-negative exercise in denying all canvassed denials. His claim is that “no extant philosophical objection to Conciliar Christology is successful in showing that conjunction to be incoherent or internally inconsistent.”

Pawl’s Defense of Conciliar Christology is really a remarkable performance. One of the standard complaints against analytic theology includes that it is historically uninformed, but Pawl can be numbered among the practitioners who keep their historical wits about them. It helps that he takes his stand on Thomas Aquinas and then does a decent job with the tradition that led to Thomas. Though he never undertakes to write in a purely historical mode, his ability to engage with the way a historical conversation has developed is on display throughout the book. Some of the same virtues that make for a good narrative of the history of ideas also structure his conversational way of examining doctrines.

The sections in which Pawl considers multiple possible ways of understanding an idea, for instance his exploration of varieties of qua statements, are very thorough. Pawl seems to raise every objection ever likely to be raised by anyone, and handles them impartially. Indeed, Pawl is so good at talking to himself that it hardly seems he needs anyone else to talk to; and he’s so good at predicting objections that many of mine were swatted down pre-emptively before I could write them. (He even raises in advance the question “where the hell is Barth” just to head off readers who might do so. Asked and answered.)