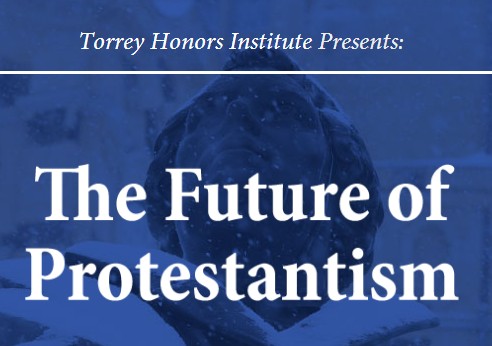 The Reformation (rumors to the contrary notwithstanding) wasn’t a total break from the Christian past; not a clean start; not a do-over from scratch. For the early Protestants, the whole point of reforming the church was to find a way of standing in continuity with the great ancient church by being biblical, apostolic, and universal. If you’ve read much at all in the church fathers, you know the Christian tradition didn’t start in 1517, and if you’ve read much at all in the reformers, you know they knew that. But how well is Protestantism today doing as an inheritor of the ancient and the reformation church, as heirs of the fourth and the sixteenth centuries? And how should Protestants carry forward this legacy in coming years?

At 7pm on Tuesday April 29 at Biola University, we will be having a public discussion on this topic, “The Future of Protestantism.” Click the link for details: it’s a free event for those who live nearby, and it will be livestreamed for those who don’t. Torrey Honors Institute, as the hosting sponsor, is able to make the event available at no charge because of generous support from The Davenant Trust and help from First Things.

This particular conversation has an online backstory. In November of last year, Peter Leithart used his regular column space at First Things to declare The End of Protestantism and provoke his readers to “envision a new way of being heirs of the Reformation, a new way that happens to conform to the original Catholic vision of the Reformers.” A minor social-media uproar ensued (at least among some of my friends, students, and alum). So here at Scriptorium Daily, I posted “Glad Protestantism,” an objection to at least the rhetorical strategy, and some of the substance, of Leithart’s post. Peter replied to my post (“Deploring What’s Deplorable“) by focusing helpfully on two questions:  1. Do anti-historical, know-nothing Protestants exist, and 2. what should be done about it? I was about to write another post (is there a word for a rejoinder to a surrejoinder? I hope not.), when Matthew Anderson intervened with the suggestion that it would be better and more fun to get together and talk things out in a public forum. Great idea: and Matt has been instrumental in pulling this together.

But we needed a third. Though we are not official, designated spokesmen for anything, Peter and I do write from recognizable theological locations. If Leithart represents the somewhat idiosyncratic position of “Reformational Catholic” (previously he has called it “reformed catholicity”), and I represent the great unwashed evangelical forms of Protestantism (personally my hygiene is actually pretty good, but you know what I mean), we really needed to be joined by someone who could articulate a self-consciously “confessional Protestant” position, anchored in public, historic, Protestant confessions of faith. We invited Carl Trueman of Westminster Seminary in Philadelphia, whose book The Creedal Imperative (Crossway, 2012) makes the case for confessions (I reviewed the book for CT here) and whose (non-celebrity!) online presence includes the Ref21 blog & podcast, and a First Things column.

This should be a great discussion on an important subject. We’re not preparing long opening statements, because we want to get into the back-and-forth of open discussion as soon as possible and make the most of the kind of discussion that can’t happen online.

With three voluble participants and limited time, you might think we’d opt for a weak moderator who would start the show by saying “OK, talk now” and then demurely fade into the wallpaper. But no. Our moderator is Peter Escalante of the Davenant Trust and The Calvinist International, and while you won’t mistake him for a fourth participant, you’ll notice a firm hand at the tiller (Escalante posted his own response to Leithart back in November).

If you’re in southern California, come on out to Biola for this. If you’re further away, you can livestream it. If you know people who would find this discussion interesting, please help spread the word.