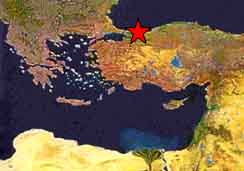 Chalcedon means classic christology. Of course Chalcedon was a city near Constantinople, but the theological meeting held there in 451 was so important and influential that for the rest of Christian history the name “Chalcedon” has been a pointer to the right doctrine about Jesus Christ in distinction from errors.

Chalcedon was a fifth-century council, and theologians in the fifth century wrestled with a particular set of problems. Just as the fourth-century saw two opposite errors (Arianism which could not confess the deity of Christ, and an Apollinarianism which could not confess his humanity), the fifth-century saw both a Nestorianism which could not confess the hypostatic union of the two natures, to and a Eutychian Monophysitism which could not confess their distinction. Eutychian Monophysites certainly knew that divinity and humanity were not the same thing. But their dread of Nestorianism in any form led them to view the result of the incarnation as the mixing of the two natures into a new nature which the incarnate Christ had: a nature both divine and human. The Eutychians who were the subject of Chalcedon’s anathemas believed themselves to be loyal adherents of Cyril of Alexandria’s theology, but they are best viewed as pushing the Cyrillian insight to a drastic extreme. Against this error, the fathers of Chalcedon anathematized “those who imagine a mixture or confusion of the two natures of Christ” and also “those who, first idly talk of the natures of the Lord as ‘two before the union’ and then conceive but one ‘after the union.'”

The mixing of the two natures imagined by Eutychianism does not produce a third substance equally identifiable as divine and human. Because divinity is infinitely larger than humanity, the result of the Monophysite Eutychian mixing of natures is not an even compound but a mostly divine Christ. What soteriological motive lay behind Chalcedon’s rejection of Eutychianism? This mixed-nature hypostasis after the incarnation, with an overpowering divinity more apparent than its submerged human nature, has some similarities to the Christ of Apollinarianism, at least insofar as an encounter with it is so directly an encounter with God that the human element seems to undergo an eclipse. C. FitzSimon Allison has tried to capture this by calling Eutychianism the “religious withering of humanity.”

With Chalcedon, not only are the full scope of true divinity and true humanity in place, but also two opposite errors for how they can be related to each other in the hypostatic union are also on the table. Through the first four councils, the fathers have faced all the hard questions and seen instances of most major mistakes that can be made. That hard-won clarity is part of what gives the Chalcedonian Definition its classic status as a balanced and far-sighted document. Consider the way the central section recapitulates more than a century of theological controversy and clarification:

He was begotten before the ages from the Father as regards his divinity, and in the last days the same for us and for our salvation from Mary, the virgin God-bearer, as regards his humanity; one and the same Christ, Son, Lord, only-begotten, acknowledged in two natures which undergo no confusion, no change, no division, no separation; at no point was the difference between the natures taken away through the union, but rather the property of both natures is preserved and comes together into a single person and a single subsistent being…

Chalcedon does not solve every possible problem, or offer extended metaphysical accounts of all its vocabulary. It does not even raise the host of psychological questions that we moderns are fascinated by. But it does accomplish a great deal. Perhaps the best metaphor for what Chalcedon accomplishes is that it provides definite boundaries on four sides: 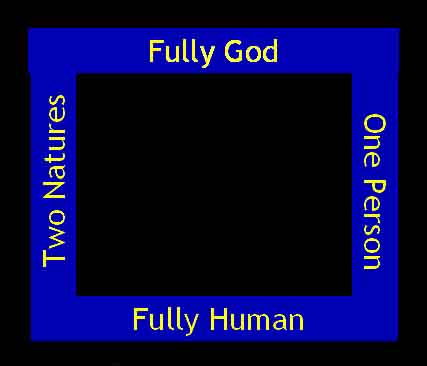 On the top, it affirms Nicaea 325 (contra Arianism) by demanding that Christ is God, consubstantial with the Father. On the bottom, it affirms Constantinople I (contra Apollinarianism) by demanding that Christ is human, consubstantial with us. The soteriological axioms “God alone can save us” and “what is not assumed is not healed” mark these boundaries out. As for how the divine and human elements come together, Chalcedon marks out the right and the left with its four mighty negatives: no confusion and no change on the one hand (contra Monophysitism Eutychianism), but no division and no separation on the other hand (contra Nestorianism).

This is the fifth in a series of posts on the christology of the ecumenical councils. Here are the others: