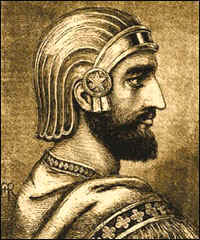 Who was God’s anointed one more than 500 years before the coming of Christ? Who was the Lord’s own shepherd, the conquering servant who carried out God’s plan to bring his chosen people back into the land of promise? Who took a giant leap forward in international religious liberty by letting conquered people worship their own gods? Who diverted the Euphrates river and marched into mighty Babylon on this day (October 17) in 539 BC?

Cyrus the Great, that’s who. Go and wikipedia yourself full of information about him, but be careful, because teh internetz thinks you’re looking for a singer named Miley. And speaking of teh netz, that’s where I got the information that Oct. 17 is the day Cyrus marched into Babylon. I haven’t been able to confirm it; in fact I even doubt it (based on the way the information is conveyed). But any excuse to talk about Cyrus is good enough.

People don’t talk much about Cyrus these days, because it is the fate of world leaders to make history and then fade into it. But it’s a shame to forget Cyrus the Great. For centuries, he was the glue that stuck Biblical history and wider world history together.

How did he do that? By being a major figure in both histories. He is a great figure in the later books of the Old Testament, especially Isaiah, Daniel, and 2 Chronicles. A quick run-through of the mentions of Cyrus in the Old Testament makes for a fascinating Bible study. But he’s also a major figure in Greco-Roman literature: Herodotus narrates his conquests, and Xenophon tells you all about how to get an education that will let you grow up to be like Cyrus (in a book called, no joke, Cyropedia).

Dorothy Sayers wrote a lively essay about the Cyrus connection, entitled A Vote of Thanks to Cyrus. “I owe a certain debt to Cyrus the Persian,” she begins. “I made his acquaintance fairly early, for he lived between the pages of a children’s magazine, in a series entitled Tales from Herodotus, or something of that kind.

He belonged quite definitely to classical times; did he not overcome Croesus, that rich king of whom Solon had said, “Call no man happy until he is dead”? The story was half fairy tale –“his mother dreamed,” “the oracle spoke”– but half history too: he commanded his soldiers to divert the course of the Euphrates, so that they might march into Babylon along the riverbed; that sounded like practical warfare. Cyrus was pigeonholed in my mind with the Greeks and Romans.

So for a long time he remained. And then, one day, I realized, with a shock as of sacrilege, that on that famous expedition he had marched clean out of our Herodotus and slap into the Bible.

Sayers talks about how Cyrus’ exploits were written on the wall of Belshazzar’s palace by the finger of God, in the presence of Daniel the prophet. Mene mene tekel uppharsin…

But Daniel and Belshazzar did not live in the classics at all. They lived in the Church, with Adam and Abraham and Elijah, and were dressed like Bible characters, especially Daniel. And here was God –not Zeus or Apollo or any of the Olympian crowd… bursting into Greek history in a most uncharacteristic way and taking an interest in events and people that seemed altogether outside His province. It was disconcerting.

From Cyrus, Sayers’ young imagination spread out to Xerxes/Ahasuerus, and saw that the Bible was talking about the same stretch of time that the classics and the ancient history books were about. “I think it was chiefly Cyrus and Ahasuerus who prodded me into the belated conviction that history was all of a piece, and that the Bible was part of it.”

Of course she could have learned this lesson from the story of Jesus, clearly situated in Roman history. “But Jesus was a special case. One used a particular tone of voice in speaking of him, and he dressed neither like Bible nor like classics –he dressed like Jesus, in a fashion closely imitated (down to the halo) by his disciples.”

Obviously Sayers is going out of her way to emphasize that she learned these lessons in her youth, when bits of history were bumping around over her childish mental landscape. But the lesson is not just for children:

Most children, I suppose, begin by keeping different bits of history in watertight compartments, of which Bible is the tightest and most impenetrable. But some people seem never to grow out of this habit –possibly because of never having really met Cyrus and Ahasuerus (or Xerxes). Bible critics in particular appear to be persons of very leisurely mental growth.

At this point, Sayers cannot resist the temptation to spend the remainder of the essay taking a few easy shots at the historical critics of her day. Fish in a barrel for a well-armed wit like Sayers. She concludes by observing that “It is just as well that from time to time Cyrus should march out of Herodotus into the Bible for the synthesis of history and the confutation of history.”

In our own day, the so-called popular so-called mind thinks the Bible is make-believe, but that’s partly because history itself has come to be viewed as make-believe. Dorothy Sayers grew up thinking about classical history, and found biblical history crashing into it via Cyrus. The apologetic task of arguing for the historical reliability of the Bible was already done. Details could be sorted out later. And certainly Cyrus needs to be reconstructed with cautious and critical historical method: Herodotus and Xenophon don’t seem to be sticking to the facts, Josephus tells a few Cyrus stories that are probably too good to be true, and the Iranian propaganda ministry has a vested interest in whitewashing Cyrus’ history. But for a mind well-prepared like Sayers’, the Cyrus connection guaranteed that the Bible fit snugly into real history. In our own day, we have to overcome the fact that the Cyrus of classical history has slipped below the horizon of cultural amnesia.