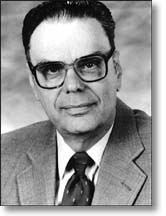 Donald Bloesch, evangelical theologian, died this week. He was a unique figure in twentieth-century theology, and now that he has passed from the scene, what strikes me about his work is his noble isolation. I don’t mean that he was personally lonely: by all reports he sustained many close friendships, and inspired long-term loyalty and affection in those who knew him. But Bloesch ran several paces ahead of the pack, and had to make his own way.

Bloesch (whose oddly-spelled name is easy to pronounce: just remember that it rhymes with “keepin’ it fresh,” “nativity creche,” and “the word became flesh”) made his most influential contribution to theology by publishing the two-volume Essentials of Evangelical Theology in the late 1970s. Essentials stood alone for a long time in the evangelical field: where else could you find a comprehensive overview of all the major doctrines, written from an evangelical point of view, in dialogue with the great tradition and with recent mainline theology, and put forth in an active voice by a living theologian putting his own name on the line? Essentials may not have been perfect, but it became an inescapable reference point for serious evangelical theology for years to come. It was as if he wrote for an audience that didn’t exist yet, and when that audience came of age and started looking around for books of doctrine, there was Bloesch waiting for them.

Obviously a man with a rigorous work ethic, Bloesch wasn’t satisfied with writing one systematic theology. He went on to produce the seven-volume Christian Foundations series, a more elaborate account of the whole field of doctrine. Again, what evangelical theologian has produced seven volumes like this? What’s remarkable about Bloesch is not that he kept winning the theology races; it’s that he was often the only runner on the course. Evangelicals produced good single-volume overviews of theology, and good introductory textbooks, and good studies of individual topics. But who cranked out seven volumes of consistently high quality doctrinal studies as the twentieth century gave way to the twenty-first? Bloesch alone.

(Well, okay, maybe Carl Henry. But his project had a different focus, clustered around issues of authority and culture. Bloesch was a theologian’s theologian.)

Donald Bloesch hasn’t founded any school of thought, and there are no identifiable “Bloeschians” in the next generations. He is one of the most important evangelical interpreters of Karl Barth, cautiously and consistently interacting with Barth’s thought during the decades when the slightest whiff of Barth’s influence was enough to get a theologian invited to leave the Evangelical Theological Society. Bloesch’s attempted resolution of the quandaries of evangelical Barthianism was only satisfying to a small minority. Anybody who was worried about the way neo-orthodoxy destabilized the doctrine of Scripture was probably just as unsatisfied by Bloesch’s account as they were with Barth’s own (here I raise my own hand, as politely as possible).

But even when it comes to the influence of Barth, Bloesch’s main contribution was to mediate to evangelical readers the determined Christocentric impulse. From first to last, Bloesch was focused on Christ as the main thing. He brought this from his own evangelical background, cultivated and elaborated it in dialogue with Barth, and channeled it to evangelicals for decades.

Bloesch also planted his feet in a mainline denomination (the United Church of Christ) and stayed there for his whole career, even as that denomination continued its intentional move deeper into liberalism. Sticking with his liberalizing denomination was a major decision for Bloesch’s legacy: One could wish that every mainline denomination had an evangelical voice like Bloesch’s in it somewhere, bearing witness for decades. When the history of the UCC is written, it has to include the fact that its most distinguished theologian in the late 20th century was blatantly evangelical. On the other hand, staying in the liberal mainline ensured that Bloesch was always at the margin of the central institutions of evangelicalism, unable to benefit fully from those strategic alliances and cooperation.

Donald Bloesch had an intellectual style that focused on staking out positions and contrasting them with alternative positions. Page after page and decade after decade, he generated a lot of slogans and labels in an attempt to capture the sort of theology he was doing. At one point he dubbed his approach “fideistic revelationism,” and distinguished it from mysticism, rationalism, fundamentalism, experientialism, relativism, etc.

Refusing to choose between liberalism and fundamentalism, he nevertheless expressed his preference for a kind of Christianity that preserved the doctrinal deposit of orthodoxy: “In liberalism truth is dissolved so that only an amorphous experience remains. In rigid orthodoxy truth is frozen into a formula or credo. But there is hope that it can be brought back to life.”

to reintroduce in theology the critical role of the experience of faith, which is qualitatively different, however, from ordinary human or even religious experience. … To affirm a theology of Word and Spirit is to affirm that the experience of faith is correlative with God’s self-revelation in Jesus Christ. Since faith is a work of the Spirit in the interiority of our being, the truth of the gospel is not only announced from without but also confirmed from within. In the theology presented here both revelation and salvation have to be understood as objective-subjective rather than fundamentally objective (as in evangelical rationalism) or predominantly subjective (as in existentialism and mysticism).

Today’s evangelical theologians may not be able to follow all of Bloesch’s theological moves, and we may have to make other decisions on important points. But without trying to land in his exact footsteps, we still have to run a lot harder if we want to catch up with the pace that Donald Bloesch set for evangelical theology. He leaped out to an early lead, kept it for decades, and finished still ahead of the pack.