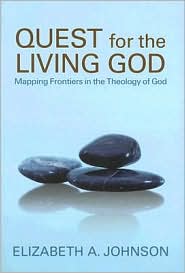 Last week a controversial book of theology was condemned by well-established critics who cautioned the public that the book did not present Christian doctrine in an accurate, biblical, or traditional way. As news of the book’s official condemnation spread, book sales spiked.

This has nothing to do with Rob Bell or Love Wins; that’s old news. This week’s controversy is deep inside Roman Catholic territory, as the U.S. Council of Catholic Bishops’ Committee on Doctrine issued a twenty-page statement detailing how Elizabeth Johnson’s 2007 book Quest for the Living God: Mapping Frontiers in the Theology of God fails to line up with Roman Catholic teaching. The best early coverage of the story is in the National Catholic Reporter, and the boost to Amazon sales is reported by Commonweal. Neither of these magazines, to put it delicately, was likely to have taken the bishops’ side against any theologian, but their reports are the best place to pick up the story.

In a one-page letter, the chair of the committee (Donald Cardinal Wuerl, Archbishop of Washington) explained why it took four years for this investigation and warning to appear:

The book in question, published some time ago, is not directed to professional theologians for theological speculation, but rather is used as a teaching instrument for undergraduate students, many of whom are looking for grounding in their Catholic faith. The Bishops’ Committee on Doctrine is first and foremost concerned about the spiritual welfare of those students using this book who may be led to assume that its content is authentic Catholic teaching.

It seems quaint now, but it used to be common for Roman Catholic books to be published with a Nihil Obstat or Imprimatur, certifying that the contents were in agreement with received Catholic doctrine. Readers could then be confident that they were getting the real thing. As the letter from the chair makes clear, what is being applied after the fact to Johnson’s book is the opposite of that: A definite statement from a committee of bishops saying that some of the contents of Johnson’s book certifiably do not accord with the teaching of the Roman Catholic church.

And the letter from Cardinal Wuerl implies that if Quest for the Living God were a book designed only for professional theologians to discuss amongst themselves, no official statement would have been necessary. Their stated concern is that the book is being used in college classes, as a text for Roman Catholic college students to learn about what the church teaches. It is not appropriate for that use, they say.

The bishops’ statement, with its focus on this one book, does not explicitly address Johnson’s overall theology as represented by her other books, or remark on her general activities as a teaching theologian. Elizabeth Johnson has been publishing for a long time, after all. She has a half-dozen influential books, is Distinguished Professor of Theology at Fordham, serves on the editorial board of many important journals, has been president of the Catholic Theological Society of America, and has many other recognitions, distinctions, and honors. And her doctrinal position has been fairly consistent throughout her published works. So why intervene with this one book, four years after its publication? Because of its use in college classes, apparently.

But it’s no wonder that the figurative warning label on the book seems ominous for liberal Roman Catholic theologians more broadly. In the past decade, American Jesuit Roger Haight, a theologian no less prominent than Johnson, was officially silenced by the Vatican’s Congregation for the Doctrine of the Faith. The CDF’s investigation focused on one late book (Haight’s Jesus: Symbol of God), but called into question his theological method altogether.

And in her 2007 book Quest for the Living God, Johnson is consistent with what she has taught elsewhere. The main difference identified by the committee is the audience: previous books were used by theologians and seminarians, whereas Quest has been used for college students.

As an evangelical Protestant, it’s interesting to watch the dynamics of this controversy playing out inside the Roman Catholic theological scene. The similarities and differences between it and the Rob Bell kerfluffle are equally instructive. On the Roman Catholic side, the provocateur is an accomplished theologian, re-stating for the third or fourth time in book form her basic teaching, through an academic publisher without sensational publicity or a reach that aspires far beyond the textbook market. The critics are recognized teaching authorities (bishops) in the theologian’s own church, they didn’t act until four years after publication, and they scarcely seem aware that there is an internet (releasing pdfs of statements on letterhead). The differences from the Bell case are striking. But the similarity is also striking: unstoppable polarization, as if there are two churches struggling with each other inside the institutional unity of the Roman Catholic church, as much as within the movement known as evangelicalism.

Theological conservatives like me think that both Bell and Johnson have crossed some lines and published books that do not state the Christian message accurately. Bell’s critics were shunted aside with the rhetorical question, “Who made you the judge of what’s orthodox?” But in the case of Johnson’s critics, it’s not a rhetorical question: the Roman Catholic magisterium is who made the council of bishops the judge of what’s orthodox. An evangelical onlooker might understandably think that that will make all the difference between the two cases. But it won’t. Two kinds of Roman Catholic theologians disagree about this book, and the gulf between them is as big as the gulf between Rob Bell and Al Mohler.