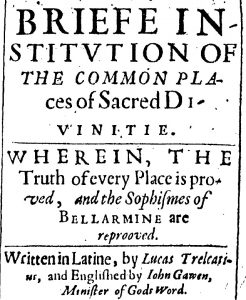 I recently read with great admiration a portion of A Briefe Institution of the Common Places of Sacred Divinitie by Lucas Trelcatius the Younger (1573 – 1607), which was translated from Latin to English by John Gawen, a contemporary of Trelcatius. Of course he translated it into early seventeenth-century English, which, as any reader of the King James Version knows, is not quite how we write anymore (“Ye knowe ek, that in forme of speche is chaunge,” and all that).

It’s a great little book. Richard Muller has described some of the virtues of Trelcatius’ handling of the doctrine of God, and all of those virtues are readily on display in the clear, precise, and powerful English of the book.

The English style is one of the things that caught my eye. I found it very interesting to watch a writer from the time of Shakespeare and the KJV take on the challenge of translating Latin scholastic theology into English.

Consider an early paragraph about the nature of theology. Here’s the Latin, with a touch of embedded Greek:

At least that’s the best I could make it out; here’s a screencap from EEBO:

And here is Gawen’s “Englished” version:

Divinitie wee meane not that first patterne, which in God is of God himselfe, nay, is God himselfe (for both God & that which is in God is the selfe same in a simple Essence) wherein by an indivisible and unchangeable act, he knoweth both himselfe in himselfe, and out of himselfe all and singular thinges by himselfe, but the stampe out of that former expressed and shapened by a revelation and gratious communication thereof.

A few things jump out right away: Gawen writes “divinitie” for “theologiam.” Theology may not have sounded like a properly English word at this stage, though according to the OED it had been in English since the fourteenth century, and appeared in Langland as well as Chaucer. Not long before Gawen, Richard Hooker had written, “Theologie, what is it but the science of thinges diuine?” Theology is of course now the default word for us to use of the field of study, and usages like “St. John the Divine” or “Master of Divinity” sound very odd to the modern ear.

Gawen gets a little tongue-tied with all the himselfes: “he knoweth both himselfe in himselfe, and out of himselfe all and singular things by himselfe” is quite a mouthful. But to be fair, he was trying to untie a pretty thick knot of reflexivities and seipsums, which is apparently what God’s “indivisible and unchangeable act” of knowledge is.

But Gawen really smooths out the phrase “non illum αρχέτυπον … sed εκτύπων.” Where Trelcatius drops in the Greek words for archetypal and ectypal theology, Gawen considers the etymologies of the Greek words and provides uncomplicated English for his readers: “Not that first patterne… but the stampe out of that.” The theology he’s teaching about, in other words, is not that primal pattern of all theology, the knowledge which God has of himself (in himself through himself by himself etc); instead it’s a stamp or impression derived from that knowledge, communicated graciously by God. It’s “expressed and shapened [yep, sic: shapened] by a revelation” so that it corresponds to God’s own knowledge.

There’s a tremendous amount of thought and verbal wrestling going on in this old translation. After four hundred years, Gawen’s translation now practically needs its own translation, and it probably wasn’t easy reading even for his contemporaries. In fact, Gawen admits his difficulties in an “Epistle Dedicatory” to Richard Lewknor, in which he calls himself  “the unworthy Translator of so worthy an Author” and says that his “labor herein …is but small” compared to Trelcatius’ great labor of composition.

And in another prefatory note, “To the Courteous, and Christian Reader,” Gawen laments that though he esteemed Trelcatius’ book high, nevertheless he “found it so Scholasticall, as that it required much Art, Reading, and Leasure” for a translator. He goes on:

Wherein, as my labour hath beene the more difficult, partly, because the Treatise is Logicall, and therefore in many places are required proper and fitte tearmes of Art, wherein our English tongue is penurious; partly, because of many Greeke words very significat, and therefore not easily expressed word for word in our language; partly also by reason of some few faultes committed in the Original Printing…

One of the fascinating things about reading such an old English translation is the opportunity to see an Elizabethan struggling to make “our English tongue” rise to the occasion of technical speech. English simply lacked appropriate technical terms, “fitte tearmes of Art,” to do careful theology at the scholastic level. One option would be simply to turn every hard Latin or Greek term into a cognate English term, practically requiring theology readers to learn a Latin and Greek theological vocabulary even to read theology in English. That is in fact one of the roads English-language theology has taken in the intervening centuries. And Gawen himself allows for that necessity:

Concerning my dealing herein, I have followed the Author as neerely in sence, as my Iudgement apprehended, as faithfully in Wordes as Discretion guided me, and as fitly in Phrase, as the Idiome of our Tongue could suffer. Only I have inserted here and there a Worde of mine owne, eyther for the explayning of Wordes more obscure, or for the supplying of such, as in Latine are more tollerably understoode: All which, I have for difference sake noted with a Parenthesis. And withall, for the better satisfaction of the Intelligent, have placed all the obscure Latine Wordes in the Margent, as leaving them to their choyce, eyther to accept of mine Interpretation, as it is, or allow of their own, if it be better.

So Gawen tried both techniques, pressing the “Idiome” of our penurious tongue until it yielded some new ways of talking, but also filling up the “Margent” with the original “Latine Wordes.”