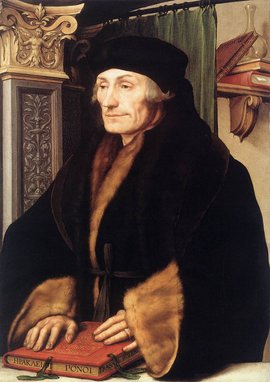 Today (October 27) is the birthday of Desiderius Erasmus Roterodamus, known simply as Erasmus, famous in his own time as Mr. Renaissance. He was “born to bring back literature,” his contemporaries said of him: ad restituendas literas natus.

The Renaissance was a defining event in Western intellectual history, precisely because it looked back into antiquity for inspiration. Erasmus perfected this method of looking to the writings of the past for the reinvigoration of the present. His central conviction was “that to turn to the beautiful literature of the past was not to turn away from Christianity and Christian values, as the enemies of the classics said, but that all that is great in human thought can be turned to the glory of God,” according to Margaret Mann Phillips (from “Erasmus and the Classics,” by Margaret Mann Phillips, in T.A. Dorey, ed, Erasmus. (Univ. New Mexico Press, 1970).

Phillips goes on to say that for Erasmus, “The task was primarily linguistic. It was not necessary to worship God in bad grammar; in a way it was as simple as that.”

If the richness of the classical heritage were to be recognized, and the service of Christ freed both from narrow devotion and from soulless dialectic, it was necessary to have the tools, a purified Latin and above all, Greek: it was necessary to have the texts, to publish the whole obtainable range of the classical authors and the Fathers of the Church, and the Greek text of the New Testament; it was necessary to go further and apply the standards obtained in various forms that would breathe the spirit of antiquity which was also the spirit of the modern world. The distinction of Erasmus lay in his clear vision of the object in view. It was more than a dedicatd scholar who was required here. It had to be someone whose ideals of scholarship were high but his sense of the ultimate aim still h igher; a practical idealist who could appreciat the necessity for exactitude but could see beyond it to the knitting together of the best in human experience. Erasmus was in this way the man for the hour. (p. 5)

What Erasmus hated was to see theology handled in way that was boring, drab, and mind-numbing. In a 1519 letter to a friend, he wrote about his excitement in reading old Cicero: “…it kindled in me such a love of what is fine and good, that I never felt anything like it before when reading our modern writers –who, Christians themselves, talk about the mysteries of Christian philosophy with great subtlety, as we think, but with dullness just as great.”

Is it better to read beautiful pagans than ugly Christians? Erasmus didn’t want to have to choose. He did everything in his power to bring about a world in which that stark alternative would never present itself. He invested his life’s work in giving his contemporaries the tools they needed to begin producing a Christian literature that was beautiful.

On Erasmus’ birthday, it is enough to celebrate this great Erasmian goal. Erasmus may have carried out his program in a naive way, and if it’s possible to be “too clever by half,” Erasmus was probably too clever for his own good by a factor of ten. Luther called him “an eel that only Christ could catch.” Roland Bainton pointed out that his legacy fell largely into the wrong hands: “Rejected by the Catholics as subersive and by the Protestants as evasive, he has fallen chiefly into the hands of the rationalists who have appreciated him chiefly for his satire on contemporary superstitions.” His motives, goals, and decisions were always too complex. But what he can teach us, and what we need to learn from him today is that it is not necessary to worship God in bad grammar, cant phrases, cheesy music, small ideas, or lazy formulations.