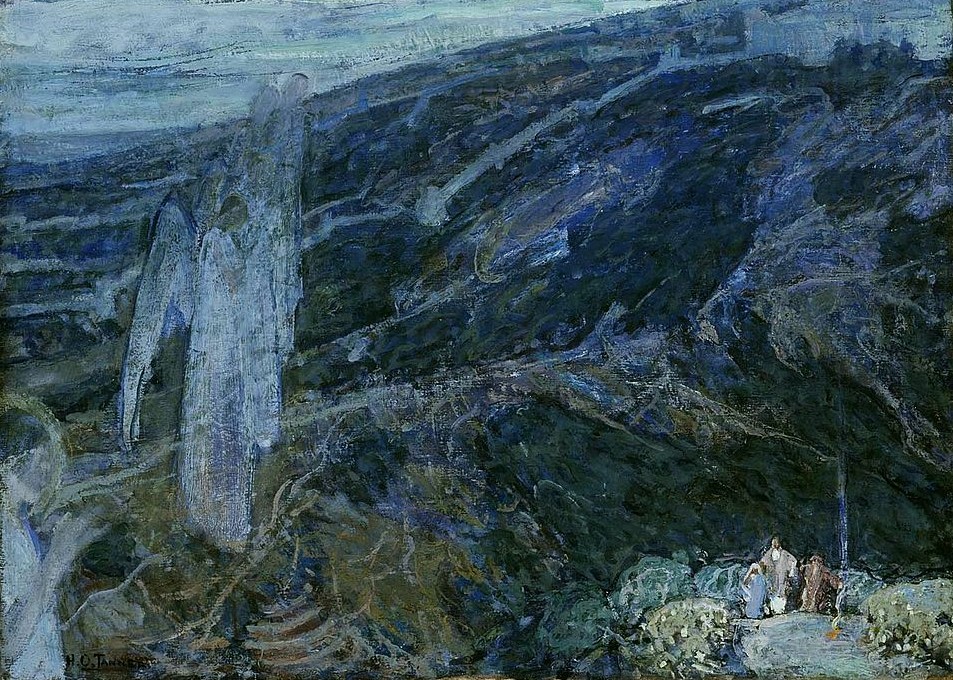 The Christmas carols have a peculiar way of talking about the birth of Jesus. A number of them –especially the Victorian ones, though earlier examples exist– talk about Bethlehem here and now, making room in the inn of your heart, hearing the angel’s message of peace and welcoming Jesus in.

The most famous version of the idea is probably Philips Brooks’ lines from the third stanza of 1865’s “O Little Town of Bethlehem,” which begins as a nativity idyll (“How silently, how silently, the wondrous Gift is giv’n”) and then turns to a comparison to God’s ways at large: “So God imparts to human hearts the blessings of His Heav’n.” Once the comparison is made, it develops naturally:

No ear may hear His coming, but in this world of sin,
Where meek souls will receive Him still, the dear Christ enters in.

And Brooks turns from altar call to invocation, praying to Christ:

O holy Child of Bethlehem, descend to us, we pray;
Cast out our sin, and enter in, be born in us today.

And that’s the unusual note: That the Son of God would come to us now. Do thoughts and prayers like this attach to any other event from the life of Christ? Do we pray for Jesus to feed our five thousand, to die for us now, to rise from the grave of my heart? Not in the same way that we sing, think, feel, and pray those things about Bethlehem.

I think I know why. But first, here’s a less famous Christmas hymn that develops the idea more fully. It’s by Alfred J. Hough, from 1911, and its title is “Our Bethlehems.”

Oh not alone in some far clime
The plains of Bethlehem lie,
Or in some distant night of time
Came angels from the sky.

Whenever Christ is born again
In human hearts, a King,
There stretches Bethlehem’s star-lit plain,
And there the angels sing.

And there are shepherds tending still
The flocks of souls by night,
And leading them with love’s rare skill
Toward the morning light.

These men hear through midnights deep
The old glad tidings ring;
And they who keep the Father’s sheep
Still hear the angels sing.

So ever more the wide world o’er
Divine birth measures roll,
And Bethlehem’s plain lies near the door
Of every shepherd soul.

Hough is very bold (he was very bold in general; a Methodist preacher bent on evangelization, he wrote the feisty classic/disaster “We’re Building Two a Day” in response to his era’s most blustery atheist).  “Christ is born again in human hearts?” “Divine birth measures roll?”

It’s always tempting to hear in this kind of language a fatal confusion between the history of salvation on the one hand and the experience of salvation on the other, as if the author were so individualistic that he rushed past the world-historical event of the coming of Jesus to get to the contemporary encounter with Jesus in my own life. Maybe that’s at work here. I wouldn’t want to defend every possible way of saying this “inner Bethlehem” message. For example, something has clearly gone awry when the 17th-century mystic Angelus Silesius made this claim: “Christ could be born a thousand times in Bethlehem – but all in vain until He is born in me.” But Silesius was seven kinds of weird; He had other problems, and who knows if the incarnation times a thousand (whatever that means, pal) could have solved them?  His type of mystic always, by definition, collapses history into personal experience, and collapses God into the cosmic process for good measure.

But I suspect that a much more charitable read of the Christmas carols is possible, and that something considerably more orthodox is the likeliest read.

Christmas is the annual feast of actual fact; the great festival of facticity, the holy day of historicity. It marks the incarnation of the Word of God in time and space in one particular, unsubstitutable, non-interchangeable human life. It’s as unrepeatable as the crucifixion.

But it also directs our attention to the pre-existence of the Son. This one who is born today is not a person who began to exist today, nor did he begin to exist nine months ago at his virginal conception. He already existed as long as God has existed, which is always. He is eternal; he is God. That’s who is born on Christmas day, “remaining what he was” but “taking up into union with himself what he was not” (in the words of Gregory of Nazianzus).

So thinking about that eternal one becoming present to us as this temporal one brings us to the brink of a great mystery, which is the mystery of the Father sending the Son to us. That mystery takes us all the way back up into an eternal relationship in the being of God, the way the Son comes from the Father.

He comes from the Father in three ways:

First, as the eternal Son who always stands in the relationship of “fromness” to the eternal Father. To be God is to be the Father generating the Son in the unity of the Holy Spirit. This is the eternal generation, or the eternal filial procession, of the Son.

Second, he came from the Father as the incarnate one, sent into the world’s history when Quirinius was the governor of Syria, in a town near Jerusalem. Conceived by the Holy Spirit in the womb of the virgin, he took human nature to himself and lived out sonship here on earth in our human nature as he always lived it out in heaven in the one divine nature. This is the visible mission of the Son.

Third, he comes from the Father to each person who hears the gospel and believes. Made present by the Holy Spirit, he enters into personal, spiritual union with them in a way that is hidden, unobservable, gracious, and mysterious. This is the Son’s invisible mission.

The distinction between the Son’s visible mission (incarnation) and his invisible mission (coming to souls in grace) is an ancient one in Christian doctrine, classically worked out by Augustine and subsequently developed (in different ways) by Lombard and Aquinas. The idea, with looser terminology, can be found in the Greek fathers as well, and in the Protestant scholastics who got it equally from Latin and Greek sources.

So what’s happening when the Christmas carols direct us to sing about Christ coming to our hearts as his manger, as his Bethlehem, as the inn where room will be made for him?

They couldn’t talk this way about the death of Christ; we would never pray “Lord, be crucified for me in my own heart,” or “where meek souls will receive him still, the dear Christ dies.” Why not? Because the death of Christ does not call to mind the sending of the Son in the same way. The closest we could get in a crucifixion meditation would be to ponder the way the Father is giving, or handing over, or offering his Son on the cross. We could talk to God about that, and sing something similar to what the Christmas carols lead us to sing. God the Father offers his Son to every person who hears the gospel with faith. But the striking once-for-allness of the cross would impose some strict limits, and in general we tend to sing and pray things that seem more like we’re the ones time-travelling to the cross (“were you there when they crucified my Lord?”) instead of the cross time-travelling to us. The manger, by contrast, seems to expand, reach out, come forward, and enter our own times and places. There is something unique about the theology of Christmas that the carols are capturing when they talk this way.