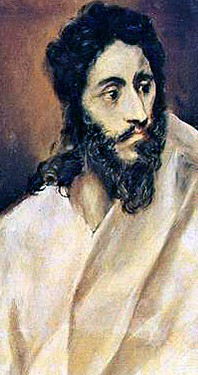 A Bible study group at my church had a great idea for a series of lessons: studying each of the disciples. Even though I’d love to learn more about John or Peter, I asked them to let me teach one of the more obscure disciples, because I’ve got access to lots of books and I enjoy a challenge.

The lot fell to me to teach the week on Bartholomew.

Here’s the problem with teaching on Bartholomew: Even though his name is in all four lists of the disciples of Jesus (Matthew 10, Mark 3, Luke 6, Acts 1), he is not otherwise mentioned in the New Testament. As I said, I like a challenge, but getting an hour-long interactive Bible study discussion out of a name in a list is a bit too challenging for my taste.

I suppose you could really milk the name. It’s got “bar” in it, which means “son of,” so his name (“bar-Talmai”) is more like a last name, a patronymic, “son of Talmai.” But I don’t know much about Talmai, either (though there are a couple of them running around the Old Testament).

There’s a pretty strong possibility that this person with the last name of Bar-tholomew shows up elsewhere in the gospels under his first name. Here’s the case:

In three of the lists of disciples, he is paired with Philip. Since at least the ninth century, this pairing has led some commentators to suspect that he may be Philip’s friend Nathanael who we hear about in the gospel of John. How certain can we be that Bartholomew is Nathanael? “This chain of circumstantial evidence is ingenious and pretty strong,” urges the old Catholic Encyclopedia. “On this, certainty is unattainable,” admonishes the judicious F. F. Bruce.

But if Bartholomew is Nathanael, it gives us the excellent story of John 1:45-51 to work with:

Philip found Nathanael and said to him, “We have found him of whom Moses in the Law and also the prophets wrote, Jesus of Nazareth, the son of Joseph.”

Nathanael said to him, “Can anything good come out of Nazareth?”

Philip said to him, “Come and see.”

Jesus saw Nathanael coming toward him and said of him, “Behold, an Israelite indeed, in whom there is no deceit!”

Nathanael said to him, “How do you know me?”

Jesus answered him, “Because I said to you, ‘I saw you under the fig tree,’ do you believe? You will see greater things than these.” And he said to him, “Truly, truly, I say to you, you will see heaven opened, and the angels of God ascending and descending on the Son of Man.”

This is the only Nathanael story in the New Testament, though he shows up again by the Sea of Tiberias in John 21:2. But what a story! And how much Jesus is able to teach in these few actions and words.

Because of the way Nathanael is brought to Jesus, commentator Rudolf Stier calls Nathanel “the fittest type of all disciples.” God has already been at work on him in multiple ways; he is summoned by the witness of another disciple; and he is introduced directly to Jesus, converted by his word. Nathanael’s faith is the occasion of Jesus’ first “truly, truly I say to you” statement.

Nathanael’s starting point is not especially promising: Philip tells him something pretty exciting (“the one Moses and the prophets told of”), and Nathanael grabs hold of the most mundane word: “Nazareth.” His first response is cynical, stereotyping, rhetorically snarky: “Can anything good come out of Nazareth?” But as Stier says, “the error of prejudice does not deepen into sin,” so that Jesus commends him as a true Israelite “in whom is no deceit.”

And then Jesus promises that Nathanael will see something like Jacob’s ladder, with angelic traffic under an opened heaven. When does this promise come true? Stier says it sort of happens throughout the course of the gospel: that in the signs he performs and the “I am” statements he makes, Jesus opens heaven and shows it to those who believe. The meaning of the life and death of Jesus could be put in his mouth as “I am Bethel. I am the way from above to below and below to above.”

I wrote out these notes when I noticed that the Nathanael story is the Book of Common Prayer’s Gospels reading for this second Sunday in Epiphany. And I noticed that because Malcolm Guite blogged his sonnet on the subject. Check it out here.