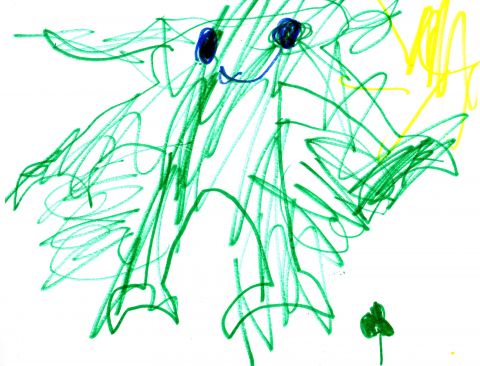 My life is all about teaching the doctrine of the Trinity. And everywhere I go, the first question people ask me about the Trinity is “what’s a good analogy for the Trinity?” I usually make a sour face before I can catch myself, because in my opinion, the most important things to say about the Trinity are things like: There’s nothing like the Trinity, analogies are distracting, and it’s possible to talk about the thing itself rather than what the thing is like. But I also have to admit that within a very limited range, for very specific purposes, the occasional trinitarian analogy will shed some light and help some people.

And St. Patrick of Ireland is somebody who reminds me of this fact. So to celebrate St. Patrick’s day, here’s a drawing of a leprechaun picking a shamrock, and the text of an interview I did back in the summer of 2002 for Biola Connections magazine (their nifty online back issues feature doesn’t go as far back as Summer ’02).

Ask an Expert: How Can We Explain the Trinity?

Of all the Christian doctrines, the Trinity has probably caused the most confusion. The idea that one God has eternally existed in three persons has challenged Christians as far back as the second century A.D. when Irenaeus began developing analogies to explain the Trinity. To help bring understanding to this doctrine, Biola Connections interviewed Dr. Fred Sanders, an expert on the Trinity. Here’s what he said.

Q. What are common analogies people use to explain the Trinity that are misleading?

A. Almost all analogies for the Trinity end up being misleading. Usually they each have one point of helpfulness and that’s it. Legend has it that when Saint Patrick was explaining the Christian faith to the barbarians of Ireland and got to the part about the Trinity, they said, “How can that possibly be true?” And he picked up a shamrock and converted the whole nation of Ireland. So, it was good enough to get an incredible piece of evangelistic work done. But if you continue thinking about a shamrock, it gets less and less like the Trinity. It would be similar to using the analogy of a pizza that is cut into three pieces (like the three shamrock leaves). God the Father is not a third of God. Each person of the Trinity is fully God.

Another common analogy is water. It can exist in three forms: liquid, ice or steam. The major problem is you can’t have the same piece of water being liquid, solid and gaseous at the same time. But the Bible shows the three Persons of the Godhead existing simultaneously.

Q. What is the simplest way to accurately explain the Trinity?

A good analogy can be helpful sometimes, but can’t possibly please God when the word “Trinity” makes us think primarily about ice cubes and shamrocks rather than the incarnation of the Son and the outpouring of the Spirit.

Q. What is a common misconception people have about the Trinity?

A. Probably the most common misconception is the fear that it really doesn’t make sense. That somehow we became Christians and that committed us to believe in certain things and , unfortunately, on of those things is rationally impossible.

But the Trinity is not irrational in any direct sense. I think the main intellectual problem with the Trinity is that it’s so dense. When we say “the Trinity,” we are really saying all the basic elements of the gospel at once. So it’s a very dense formula, sort of like e=mc2 is difficult to understand —not because it’s logically contradictory, but because there’s so much information packed into it.

The Trinity would be irrational if it were self-contradictory —for example, if it said that there are three person in God and yet only on person. Or if it said that God is one being and God is three beings. But for God to be one Being who is three Person in no way contradicts the laws of logic. Now, it may be beyond our understanding in some way because we don’t know of any other being like that. It’s a mystery, but a mystery is not an excuse to stop thinking. A mystery is something that is bigger than our minds can take in and invites us to a lifetime of intellectual wrestling.