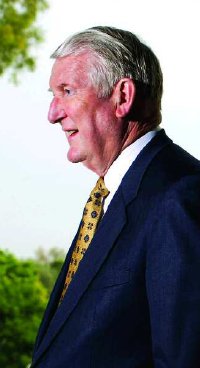 This brief note may not be 36 Views of Mount Fuji, but Dr. Clyde Cook was a mountain of a man: he was tall, for one thing –only 6 foot 3, but he acted so much taller. And his life and legacy repay examination from many angles. Here are the ones that come to mind for me in these days after hearing of his death on April 11, 2008.

A Personal View: When my kids were 4 and 6, we found some Prayer Coins in a desk drawer. They wanted to have them, and then to know what they were. I explained that the Fellowship of Christian Athletes had given these to us back in college so we could carry them with us and remember to pray for the FCA and the athletes they minister to. As we kept talking, I decided to take the kids on a walk over to Biola’s campus, where we could visit a special place set aside for prayer, the Rose of Sharon Prayer Chapel. I could tell that these physical connections were really helping the kids wrap their minds around prayer in a new way, so as we strolled around campus, we kept up a conversation about praying.

We went into the prayer chapel and said some silent prayers together. Then, as we walked out of the quiet chapel onto a the busy sidewalk, President Clyde Cook came walking by, with Anna Belle beside him. He stopped, pointed toward us, and said in his booming voice, “Fred! I want you to know that my leadership team met and prayed for you and your family this morning!” So there we were, prayer coins in hand, coming out of the prayer chapel, and Clyde just happens to stroll up, twelve feet tall in his bright blue suit and piercing blue eyes, and deliver the final blow: we prayed for you. It made a deep impression on the kids. Okay, I mean on me.

A Spiritual View: I once heard Dr. Cook describing Biola’s annual traditions, noting that we break for Bible Conference in the Fall and Missions Conference in the Spring. “Bible and Missions: that’s what we’re about here, and that’s why those are our two breaks.” Now that is a good way to summarize Biola University’s reason for being. And it meant even more for a president to be ready to say it about his school, and to embody that Bible and missions emphasis.

A Mannerly View: At a Biola graduation ceremony, we once had an elderly missionary woman as the speaker. She had done great things in her life of mission work, which Dr. Cook summarized for us in his adulatory introduction of this tiny woman in a wheelchair. Everybody at the ceremony was honored by the opportunity to hear from one of the saints, especially as she started right into an animated style of story-telling. But the stories kept coming and coming, up to the time limit that a gymnasium full of excited graduates and their families could be expected to sit still for. And after she reached that time limit, she kept going. Her family tried to coax her off, but she waved them aside. The crowd tried good-naturedly to applaud her off the podium, but she wouldn’t budge. The situation became tense. I, for one, was worried that the crowd couldn’t possibly keep up its good behavior for much longer. Finally, Dr. Cook personally came forward to wheel her off the stage, still telling “one more story.” I saw it with my own eyes, but I still can’t quite picture how he managed to do it: something in the way he intervened expressed respect for her, concern for the audience, a sense of decorum and good humor. I suppose you would have to be Clyde Cook to do that. When he returned to the microphone, he joked, “I must be the biggest heel in La Mirada tonight.” The audience laughed with him, but not too hard. He had led us in behaving just right, and a large and diverse crowd, we all followed his lead.

An Institutional View: Biola only has 100 years of history, and Clyde presided over a quarter of them. We will need some more distance from the Cook Era to be able to evaluate it in proper perspective. One way to summarize it is in terms of the school’s growth: he took the helm just as we had achieved a somewhat tenuous university status, and steered through times of economic trouble to a season of expansion and prosperity. When Christian colleges move upscale, either in size or academic reputation, they often lose their grip on the things that they were most committed to. It doesn’t have to happen, of course, and there might not have been any nefarious forces of creeping liberalism on Biola’s campus waiting for a chance to steer the university away from strong evangelical commitments. But the history of religious schools in America dictates that it’s always worth worrying about that kind of drift. No fear, though: Less than one year after the jump to university status, Dr. Cook took office, and kept office for a remarkably long tenure, ensuring a steady institutional trajectory (and almost completely missing the Baby Boomer leadership demographic). The comparison has to be very loose, but Dr. Cook played for Biola a similar role to the role John Paul II played for the Roman Catholic church. Remember all the buzz and excitement about how Vatican II was going to open the windows of the Roman Catholic church so that fresh, modern breezes could blow in? But what happened next was that John Paul II took office, kept it for a remarkably long time, and steered a steady course. Looking back to Vatican II through the papacy of John Paul II, it can be seen as an important event but not one that turned the Roman church upside down. I think that when the history of Biola is written, and its possible trajectories are considered, the presidency of Clyde Cook will be recognized as the one that kept Biola on the right track at a juncture in its history when it could have gone otherwise.