Karl Barth once remarked that if he could be accused of founding a school of Barthians, then at least its membership was limited to his two sons, Markus and Christoph, who were professors of New and Old Testament respectively. Not a bad academic family legacy for a systematic theologian! 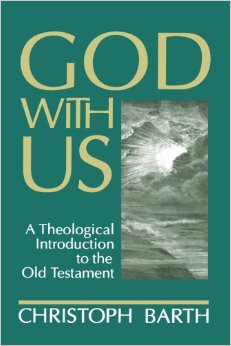 Markus Barth (1915-1994) was a pretty well-known scholar, but Christoph Barth (1917‑1986) was more obscure because he published less, and spent much of his career teaching in Indonesia. He lectured in Jakarta and Ambon for many years, and then took a professorship at Mainz, Germany, during which time he put his OT lectures into publishable form. They were published in four volumes (!) in Indonesian between 1970 and 1990. When Barth died, he left his own nearly-complete English translation of the work, and Geoffrey Bromiley was entrusted with the task of condensing it to a single volume. Apparently the longer, Indonesian version included a lot of standard introductory material that Christoph’s widow, Marie‑Claire (also a theological teacher) agreed could be trimmed. The result was the 1991 book God With Us: A Theological Introduction to the Old Testament. I read this book the year Eerdmans published it, and it’s been my favorite OT theology ever since.

It’s fascinating to me that God With Us is not just a document of the Barth family style, or the Biblical theology movement, but also a missionary document, the first Old Testament theology written for the Indonesian people. It was intended “for the use of lay Christians and their pastors within the Indonesian churches.” Christoph Barth wanted to expound the works of God in the Old Testament in such a way that the Indonesian people, at a critical time in their national consciousness, would be able to recognize this same God at work in their midst. In the words of Marie-Claire, Christoph

intended to write a textbook sharpening his student’s ears, so that in listening to what God had said and done in the past, they would be open to what God’s Spirit says and does now. As a foreigner and as a scholar he refrained from actualizations, yet, being the first author to write an Old Testament theology in Indonesia, he carefully chose words and concepts that might resonate in a society struggling to be a community where people of different backgrounds may live in peace and justice (Foreword, p. viii).

Not knowing Indonesian culture or history, I suspect my ears are not trained to hear all the echoes and resonances in this text. But there is a richness to the exposition that I suspect is part of what draws me to it. Barth repeatedly focuses on the peoplehood of Israel, their national identity as defined by their relation to the LORD and each other. Expounding a book about a very old nation to a very young nation, Barth generated a text that can help modern readers break some individualistic hermeneutical habits. One reviewer (Boyce) commented that the cross-cultural and communitarian tone is what “gives this work its contemporary edge and may well make it the Old Testament theology of choice for the late twentieth century.”

At least in its English form, God With Us stays close to the biblical text and has minimal interaction with scholarly literature. There are no footnotes, and the indices list only subjects and scripture references, without a modern name to be found. If you’re gun-shy of critical scholarship and imposing German names, there’s nothing to alarm you in this package. An occasional concession to criticism shows through (a late Daniel, two Isaiahs, etc.), but this is more than balanced by an overarching conservative tone and a very high view of scripture. In fact, Barth insists upon the Mosaic origin of the entire Torah at Sinai, a view which puts him almost as far right as the average informed layperson.

Barth’s goal in this 400-page book is to survey the Old Testament’s major elements in a manner fitting the subject. For Barth, that means confessing the mighty acts of the living God and his dealings with his chosen people, as opposed to distilling a set of doctrines from the text.

In a rare allusion to modern scholarship, Barth signals his indebtedness to G.E. Wright’s 1952 God Who Acts, and Gerhard von Rad’s 1957 Old Testament Theology. This is helpful for those who know their OT theologies: you’ll want to situate Barth somewhere between Wright (mighty acts of God!) and Von Rad (Überlieferungsgeschichte!). God With Us, in other words, treats Old Testament theology as a kind of confessional historiography. It is an attempt to retell and reflect upon the scriptures as “a dynamic story instead of a static system of religious ideas (p. 5).”

As justification for this approach, Barth cites not modern methodogies, but four biblical models:

1. The Pentateuch is thematically structured around the history of Israel’s origin from God’s actions.

4.  Even the apostles first proclaimed Christ to the Jews by reciting God’s mighty acts (see the speeches in Acts), and the earliest creeds (I Cor. 15) were summaries of God’s actions.

Having settled on this basic approach, Barth divides his subject into nine chapters, each chapter focusing on a single act (or type of act) of God. Barth claims no scriptural mandate for selecting these nine and omitting others (the raising up of the judges is not treated, neither is the institution of the priesthood nor a number of national deliverances, most strikingly deliverance from the exile), nor does he argue for any theological significance to the order in which he treats them. They are not in a hierarchical or simply chronological sequence, nor do they follow salvation‑history, rather they are like “beads on a string.” “Each of the topics…has a theological aspect (in the strict sense), an anthropological, a soteriological, and an eschatological aspect, so that each contains an OT theology on its own.”

The exposition of God’s nine great acts constitutes the bulk of the book; really everything but an eight‑page introduction and a two‑page conclusion.

(I’ll post my summary of each of these chapters in another blog post, because I think the recital of the themes is good in itself.)

God With Us shows Barth’s fluency with the elements of the Old Testament, a fluency which could only have come from decades spent teaching the Bible. I never read a section of God With Us without needing to reach for the OT itself to check a reference or follow up on a line of thought Barth has suggested. Walter Brueggemann’s blurb for the book praises this virtuoso text‑handling: “Barth mobilizes an enormous number of specific textual references and thereby richly exposits core theological claims.”

How Barthian is this Barth? Well, there are some superficial similarities. This is a multi‑volume theological work rich in exegetical insights, and the author died while working on the last few chapters. As in the Church Dogmatics, small-print excursuses shelter the slightly more technical discussions, but no footnotes are used. More substantively, though, there is a clear family resemblance between the Indonesian missionary and the Swiss theologian. What could be more Barthian than to emphasize God’s dynamic initiative as the living Lord of his people? Christoph interprets certain elements of the OT along reformed confessional lines, as could be expected. But he does not go out of his way to do so, and generally strives for an exemplary objectivity.