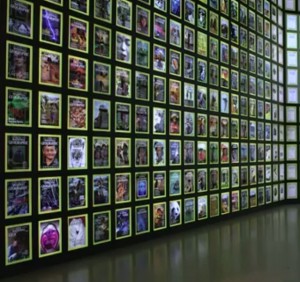 For some years now, I’ve had the vague sensation that the ads about ecology and environment have changed over the course of my life. I grew up with lots of nature documentaries, and also with the “Give a Hoot, Don’t Pollute” and “crying Indian” ad campaigns, plus the energy crisis of the Carter years and the acid rain fears of the Reagan years. So there’s always been “green messaging,” as the ad people say, in my awareness. But my hunch is that it has become less imaginative, more uniform.

My thirteen-year-old is a major consumer of natural history books and documentaries, and both of my children contend with each other for who has the rights to keep which stacks of National Geographic in their rooms. They’re the ones who started to identify the monotony with which a small handful of ecological messages are preachily imposed on all nature shows in this era: you rarely get ten good minutes of animals behaving like animals before the voice-over ominously intones, “But this species now faces its most dangerous enemy…. MAN.” The kids also know how to run and get a snack as a certain kind of documentary rounds the corner from its informative section to its predictable and mandatory moral-of-every-story section, which they call the “global warming, all your fault” section.

Never mind the fact that man is the greatest enemy and that global warming is all your fault: I’m talking about the way the advertising is propagated. I had half a mind to look through the stack of National Geographics with my kids one of these afternoons, to see how the ads developed over time.

But then I found out a team of scholars had already done this, and published their findings recently in the journal Public Understanding of Science: “Key Trends in Environmental Advertising Across 30 Years in National Geographic Magazine,” by Lee Ahern, Denise Sevick Bortree, and Alexandra Nutter Smith. My idle thought turns out to be a research program, and one they carried out with precision.

Well, actually I’m not so much interested in advertising as I am in the way that green messaging has become part of the pervasive cultural messaging in entertainment and public morals. But ads are a good place to start looking, especially if you’re  marking, coding, and collating data from 1979-2008 (pretty much the period I was curious about). The researchers didn’t code for creativity, so they couldn’t speak to my hunch that ecological messaging is getting flatter and more predictable.

The research project also couldn’t quite confirm that doom-and-gloom or guilt-and-shame messaging had taken over. Their category was “loss-framed” appeals, that is, appeals to what you stand to lose if you don’t take action. And in ads, they found a significant split between advocacy groups on the one hand, and businesses on the other.

Overall, advocacy organizations are significantly more likely to use loss-framed messages. Because these groups are looking to change attitudes and behaviors, loss frames may indeed be more effective. However, in the context of green advertising overall, they may be seen as more negative in tone. Recent trends indicate that advocacy organizations may be moving toward more gain-framed appeals.

If this is true, I suspect the reason advocacy groups can move on from loss-framed appeals is that these appeals have become a fairly predictable background noise. If movies and TV are emphasizing ecological apocalypse, actual ecological advocacy organizations are free to find other messages.

I was fascinated by how much the whole idea of green marketing has been studied. In the slightly stilted academic language of this journal, the authors say

Over the past three decades, ‘green’ has evolved into a common marketing heuristic. Beyond corporate social responsibility (CSR), companies are now aggressively marketing to a new consumer segment – LOHAS (lifestyles of health and sustainability) – a fast-growing market worth an estimated $300 billion in goods and services annually (Natural Marketing Institute, 2009).

Maybe you never thought of yourself as LOHAS before, but buck up: you’re part of a $300 billion industry! All these clever people are figuring out how to message at you. Notice also that there’s not a single point of view behind all of this: on the one hand there’s a cluster of ecological advocacy groups making various decisions about the best way to communicate, and on the other hand there’s a vast array of businesses trying lots of different strategies, and in the middle is The Public, whose views both sides are guessing at, triangulating from, and keeping up with.

And I learned a lot from this brief report about a revolution within the ranks of environmental behavior theorists:

‘Post-environmentalists’ such as Michael Shellenberger and Ted Nordhaus have shaken up the movement by advocating a more market-oriented approach to ‘selling’ green, based on the thesis that environmental concern will not emerge until people feel they can afford it, and that pointing out the economic advantages of pro-environmental behavior is the most promising route to behavior change (Shellenberger and Nordhaus, 2004). Others argue that the way to long-term change are appeals that reinforce core environmental values and tap into people’s identities, and that economic-advantage appeals may just reinforce cultural frames that run counter to environmental values (Crompton and Kasser, 2009; Lakoff, 2004).

Apparently the most upbeat ads feature “costly signaling,” or appeals to “the desire to be seen as being able to afford to be altruistic toward the community.” That’s pretty obvious if you’ve shopped at Whole Foods, which practically screams the message, “You’ve made it! You can afford to spend more on every item because it’s the right thing to do (and so tasty too).” Is that the triumph of ecological awareness, or its betrayal from within?

If I were to look into this subject further for theological purposes, I’d pluck at that thread of  “tapping into people’s identities” with ecological appeals. Dangerous stuff there: “What is green man, that thou art mindful of him?” The researchers didn’t use the category of self-righteousness, or of the devious ways we make use of environmental concern to build ourselves up as people who can say to ourselves, “I thank God that I am not like those others.” I’d also like to think more about how the advertising-reinforced habit of talking about the entire earth as one system serves as a projecting screen for thoughts about the absolute, about being in general, about God. Is that a useful stepping stone to higher thoughts, or a false transcendence for people whose religious itch is easily scratched?