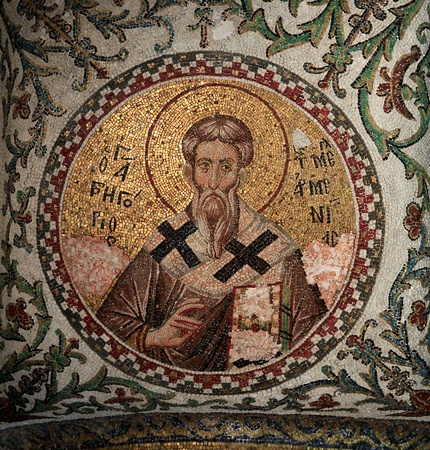 Gregory the Illuminator is the man who persuaded the king of Armenia to renounce idolatry and accept Christianity.

That was in the year 301, making Armenia the first nation to become officially Christian. According to Armenian legends, the gospel had come to them long before that official conversion, though. Supposedly, Thaddeus, one of the 70 disciples sent out by Jesus came all the way to Armenia and established a church. Another legend recorded by Eusebius of Caesarea traces the origins even further back: It says that Abgar, prince of Armenia, sent a message to Jesus asking for healing, and received back from him a personal letter and a picture!

A lot of the story of Gregory is just about as legendary as that, but there is also a pretty solid historical core to it. The short version is that Gregory served faithfully in the court of the king until he was asked to join in worshiping idols, at which point he refused, submitted to gruesome torture, and finally converted the king by his testimony.

The long version, encrusted with unbelievable embellishments that make Gregory’s story sound a lot like the book of Daniel, is interesting and well worth reading. The legendary account, written by a pious hagiographer, communicates the absolute rage of the king at Gregory’s refusal to worship idols, and Gregory’s clear and credible witness to the gospel:

For while the king was with his attendants, with wreaths and clustered branches of laurel, going to offer a sacrifice to the idols, he perceived that his friend Gregory would have nothing to do with it; whereat he became very angry, inasmuch as, from the many faithful offices of Gregory, he fully expected that he would also be one with him in paying due honour to his goddess.

But the saint said to him, ” The Lord of all teaches us, in serving our lords, to pay every attention that does not defile the soul *; wherefore I never grudged thee any act of such a service, neither did I ever do aught by constraint. But as to the service that places the soul in danger, and that estranges us from our Creator, with it ought we never to have any thing to do; yea, not even when he who gives the order is our emperor, and has power over our life.”

This brought on weeks of torture and years of imprisonment for Gregory, during which time he made some amazing speeches. His honorific title, “the illuminator,” points to his shining example and his enlightening words of explanation, as well as to the fact that the light of the gospel lit up Armenia as a result of his work.

One of Gregory’s best and most effective speeches came after the king made his first threat of capital punishment: “I see that thou seekest thine own death, and that thou lookest to this burial ground, in which many gone before us are buried, as thy reward. So then will I lose no time in sending thee thither. But first, show me who is that Christ of whom thou speakest, that I may know; and who is the rewarder of thy services, whom thou callest thy Creator? Is He, may be, the keeper of the burial ground, whither thou longest to go; or is He, perhaps, the keeper of the prison, who will break thy bonds when once thou art in chains?” Gregory’s response:

Christ is the Son of God, through whom God made the world; He is the Judge of the quick and dead, who rewards good to them that do good, and evil to them that do evil, being, at the same time, as thou hast just said, the Keeper and Warder of burial grounds; for He keeps the bones of all men, and will raise them again to life at the general resurrection, as He showed it to us in His own person. For of His own accord He died and went into the grave; but neither death nor hell could of themselves hold Him captive; for after three days He at once rose from the dead, and by His resurrection He brought to light the resurrection of the dead.

For He is Himself the Resurrection and the Life, who keeps the spirit of every man in life, and who will renew us at the general resurrection and give us new bodies. Then will He openly reward every man according to his works; Who even in the bonds with which thou threatenest me is wont openly to show His mercy and to deliver those who put their trust in Him. Then will there be endless joy and pleasures for evermore, when His beloved ones, who had kept His commandments, whom He had called and invited, shall by Him be crowned with immortality in His eternal Godhead; when the wicked shall also by Him be made immortal in the torments prepared for them. His coming is the day on which He will come and do all this. And His angels are they that wait continually on His great and glorious Godhead, in His everlasting kingdom. And our hope is to look for these things.

On the other hand, your hopeless condition lies in this, that ye do not know your Creator according to His commandments, neither do ye seek to become acquainted with Him. Thus are ye like the horse and mule, that have no understanding; yea, ye know less than the ox or the ass, for ye do not know your Creator, who, therefore, will in His own good time put a bit in your mouths and gag them, so that ye will not be able to come nigh Him. But as to what thou saidst, that I set the gods at enmity with you: who can ever be at enmity with things that neither feel the honour paid them, nor resent any amount of contempt ? For they rest on nothing but the dreams of men raving mad: they have a mouth and speak not, they have eyes and see not, ears and hear not, a nose have they and smell not, hands have they and handle not, they have feet and walk not, neither is there any breath in their mouths. Like unto them are they that make them, and that put their trust in them.

The artful comparison of idol-worshipers to horses and donkeys struck home, and made the king order a punishment that had poetic justice about it: “Then the king commanded that his hands should be tied behind his back, that a bit be put in his mouth, and a heavy lump of rock-salt upon his shoulders. They then made him, thus harnessed and with his face to the earth, run for some time like a beast of burden, because of his saying to them, that they were like horses and mules, that have no understanding and have no thought to seek after God.”

Gregory took this punishment for seven days, and then a whole series of terrible tortures, I think 11 in all, over the course of the next several weeks. You could tell he was getting the king’s attention, though it took years of imprisonment and a series of coordinated miracles involving a troop of nuns from the West before Gregory’s work turned on the lights in Armenia.

According to this long version of his life and ministry, Gregory seems to have worked his way into the king’s court specifically so that he could have credibility when the time came to witness, and he even seems to have been preparing to deliver that witness in the form of standing up to persecution. Though he did not actively seek a chance to be tortured, he had a pretty realistic idea of what it would take to get the attention of this king, and turn the hearts of this nation.

Gregory is thought to have died on March 23, 331, after decades of peaceful work establishing the churches of Armenia.

Armenian Historical Postscripts:
(1.) Armenians are not related to Arminians, though they can freely choose to be Arminians if they want.
(2.) That thing that happened in Turkey about a hundred years ago? Let’s agree it was genocide.
(3.) The Armenian Apostolic Church rejected the council of Chalcedon and preferred a more unitary way of talking about how Christ is both divine and human. Modern ecumenical discussions suggest that they may be saying the same thing as Chalcedon, but with more of an anti-Nestorian edge. It’s a little complicated.
(4.) Though they are a minority in the Christian history of Armenia, there are some pretty cool Armenian Protestant evangelicals out there. Hi guys!