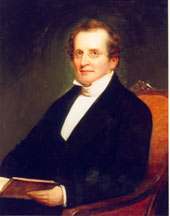 Today (December 27) is the birthday of Charles Hodge (1797-1878), who deserves a place on the short list of greatest American theologians. His reputation precedes him, making it hard to know what to write about him: Backbone of Princeton orthodoxy, pillar of Reformed theology, icon of Protestant principle, author of the influential 3-volume Systematic Theology, etc.

Hodge is easy to make fun of and dismiss as the stodgiest of the stodgy old Calvinists. He stayed in one place, trained thousands of Presbyterian ministers, wrote a two-volume constitutional history of the Presbyterian Church in America (scarcely readable in its own day, and sure to produce terminal torpor in ours), and boasted –boasted!– that as long as he was at Princeton Seminary, no new ideas had been taught. Feel free to roll up all your stereotypes about hard-headed Reformed churchmen and throw them at Hodge; many of them will stick. He positively invites such treatment. And he had an annoyingly complex view of slavery, which further alienates us from him.

But here’s the secret of Hodge’s theological stance: He decided to be the grown-up in a theological culture that had decided that an extended adolescence was the easier path. He dug in at Princeton and stood firm, allowing everybody else to take their bearings from what he represented.

American religion in the middle of the nineteenth century was volatile. Scanning the spectrum from left to right, you had William Ellery Channing (1780-1842) symbolizing the Unitarian declension of the upper classes; Horace Bushnell (1802-1876) pushing forward with self-confident evangelical liberalism; Charles Finney (1792-1875) with red-hot, weepy revivalism that was doctrinally suspect and almost certainly Pelagian; and John W. Nevin (1803-1886) pleading with Protestantism to understand itself as a high-church, eucharistically-saturated, mystical phenomenon. All of this (and more than the symbolic figures named here –where would we institutionally locate the widespread social-justice vision of Christianity symbolized by the religious writings of Harriet Beecher Stowe, for example?) was happening in a rapidly-shifting culture that seemed like the end of the world, and was punctuated by the Civil War. If you were an evangelical Christian in 1850, where would you have gone for your theology? Fortress Hodge was a great option.

Hodge wrote a series of Bible commentaries: Romans (1835), Ephesians (1856), First Corinthians (1857), Second Corinthians (1859). His student, the sympathetic B.B. Warfield, admitted that Hodge handled the details of exegesis rather poorly, so that “his discussion of disputed grammatical or lexical points had a flavor of second-handedness about them.” And when it came to theological argument, “often texts were quoted in support of doctrines of which they did not treat; and a meaning was sometimes extracted from a passage which it was far from bearing.” But Warfield also named Hodge’s strength as an interpreter of Scripture:

Dr. Hodge’s sense of the general meaning of a passage was unsurpassed. He had all of Calvin’s sense of the flow and connection of thought. Consequently the analysis of passages was superb. Nothing could surpass the clearness with which he set forth the general argument and main connections of thought. Neither could anything surpass the analytical subtlety with which he extracted the doctrinal contents of passages… He seemed to look through a passage, catch its main drift and all its theological bearings, and state the result in crisp sentences, which would have been worthy of Bacon; all in a single movement of mind.

Hodge’s strength at big-picture exposition makes his commentaries on the major epistles of Paul still worth reading; I especially like his Ephesians for the way it relates the letter’s argument to larger soteriological themes.

But Hodge’s “analytical subtlety” and facility with “general argument and main connections of thought” were really on display in his monumental Systematic Theology (1871-1873), completed in the last decade of his life. Here as everywhere, Hodge was keen to avoid novelty. He knew his old Protestant sources well: The whole system is shaped like the Protestant scholastic dogmatics of the previous centuries, and it bristles with footnotes to Turretin. But Hodge translated the whole project into the American idiom (page-long Latin quotations and occasional bursts of German notwithstanding). If you survey American systematic theologies for the next century, they all look like Hodge with minor modifications to fit a different denominational setting.

Page after page, Hodge’s Systematic Theology marshals biblical argument, deep historic reading, and sharp judgments. Hodge tends to teach by stating his own view and then clarifying it by bringing in opposing views for contrast. This may look unduly polemical to modern readers, especially when Hodge refutes not just non-Christian views, but alternative Christian theologies (“the Roman view” or “the Arminian view”). But this kind of “comparative symbolics” was a widely-practiced form of ecumenical dialogue at the time, and is similar to (though much clearer than) the “Four Views” approach that is widely accepted in our time. Another attractive trait of Hodge’s system is the combination of analytic clarity with organic interconnectedness of the doctrines. When people mock Hodge’s Systematic Theology as a dry, propositional heap of discrete doctrinal statements, you really ought to inquire politely if they’ve read the book. They may just be taking a position on Hodge’s public image. I’ve never consulted Hodge’s Systematic Theology without profiting from it, but I’ve never read all the way through it, either. The worst thing I can say about it is that it’s dated: When Hodge dismantles an argument, the present-day reader needs to do the imaginative work of figuring out what current position is represented by the Finneyites, Dr. Schmidt, or Kleuker.

Best Hodge book, and easiest to read: 1841’s The Way of Life: A Handbook of Christian Belief and Practice. And my favorite recent piece of scholarship on Hodge is Mark Noll’s “Charles Hodge as an Expositor of the Spiritual Life” in Charles Hodge Revisited (Eerdmans, 2002), which rightly puts “Hodge the dogmatist” in tension with “Hodge the experientialist.”