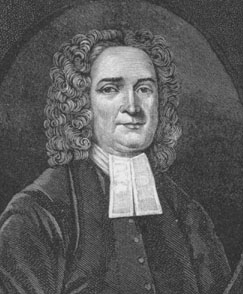 Today (December 4) is the birthday of John Cotton (1585-1652), a Puritan pastor with a ministry in both Bostons: The Boston in Lincolnshire, England, and later the Boston in New England. He was an accomplished Cambridge University man (graduate of Trinity, fellow of Emmanuel) whose theological opinions were consistently moving in a more Puritan direction during a period when the Church of England was navigating the other way. When the conflict came to a head, he took off for America, where he continued to develop his views in a more consistently Puritan direction, with actual Congregationalist church polity becoming a live option for him.

Cotton was massively influential on the life of the colonies in the late 1600s, shaping public thought on a wide range of doctrinal and political issues. He is sometimes called The Patriarch of New England.

His most enduring work is the catechism he wrote for young people, which was a best-seller on its own and then was incorporated into the New England Primer. Its original title was

Milk for Babes,
Drawn out of the Breasts of both Testaments,
Chiefly for the Spiritual Nourishment
of Boston Babes in either England,
but may be of like use for any children

The choice of opening question is a major decision for any catechism, and Cotton’s is as good as any I’ve seen:

Q: WHat hath GOD done for you ?
A. God hath made me, He keepeth me, and He can save me.

The catechizer’s follow-up is equally good, turning the child’s attention from God’s benefits to God himself:

Q. Who is God ?
A. God is a Spirit of himself and for himself.

Q. How many Gods be there ?
A. There is but one God in three Persons, the Father, the Sonne, and the Holy Ghost.

The rest of the catechism retains the same brevity and crispness, emphasizing sin and salvation, and giving lots of space to an exposition of God’s law (via the Ten Commandments). Each commandment is considered in its broadest possible application, so that “thou shalt not steal” forbids not just “taking away another man’s goods without his leave,” but also “spending our own without benefit to our selves or others,” and the same command charges us positively “To get our goods honestly, to keepe them safely, and to spend them thriftily.”

I was glad to see the trinitarian element in the definition of prayer:

Quest. What is Prayer ?
Answ. It is a calling upon God in the Name of Christ, by the helpe of the Holy Ghost, according to the will of God.