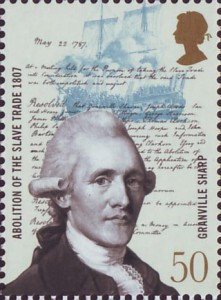 Today (November 10) is the birthday of Granville Sharp (1735-1813). Sharp is remembered for two major accomplishments.

First, you will find his name in every history of the abolition of the slave trade. His involvement began when he met a man named Jonathan Strong, a slave from Barbados who had been beaten so badly that his owner threw him out as useless. Sharp was not a trained lawyer; he was a civil servant, a clerk in the ordinance office in London. But he took up Strong’s case and argued it through the courts until he won the man’s freedom from an abusive owner who refused to release him. After that, Sharp became involved in an increasing number of anti-slavery causes, from the prosecution of a slave-ship captain who had thrown living men overboard to recoup financial losses, to the founding of a home colony in Sierra Leone for African slaves to return to. But his greatest contribution was his role in the Somersett case, which resulted in the remarkable law that slaves transported to England became free upon touching English soil. It was not quite the abolition of slavery, but it was a major milestone along the way, and the next generation made the most of it in the cause of freedom.

The second thing Sharp is famous for is a grammatical argument about New Testament Greek, known as “Sharp’s rule.” It is an observation about how the word “and” works in sentences that contain two nouns of the same case, when the first noun has an article. In those cases, Sharp observed, the one article refers to both nouns, so both nouns point to the same person. This is pretty detailed (and I even simplified it a bit too much), but it pays off in the interpretation of a half-dozen texts where the two nouns in question are about Jesus and God. If Sharp’s rule is right (and it is), those texts teach that Jesus is divine. The best example is Titus 2:13’s reference to “our great God and Savior, Jesus Christ.” For details, see Dan Wallace’s story of Sharp here, or his examination of Sharp’s rule here.

What led this civil servant to devote his attention to Greek grammar? One of his co-workers was an anti-trinitarian of the Socinian variety. Sharp kept up a running discussion with him about key passages of the New Testament, and got increasingly drawn in to the details of the argument. He couldn’t stand having to set aside those disputed verses where “it all depends on what the word ‘and’ means.” So he studied what the word “and” means in those passages, right down to the bitter end.

What led this scholarly civil servant to devote his attention to anti-slavery? He found a man beaten nearly to death, and helped him. That help went beyond the immediate physical and financial help, and required Sharp to learn the ins and outs of British law regarding slaves. So he studied the status of slaves in law, right down to the bitter end.

(This is the third entry in the occasional series, “How the Trinity Freed the Slaves.” The first entry was about William Wilberforce, the second was about the country of Benin. At unscheduled points in the future, I want to write about the ransoming work of the medieval Trinitarian order, the theology of American slave churches, and other items of interest. I just keep noticing the Trinity hanging out with slaves. Freeing them.).