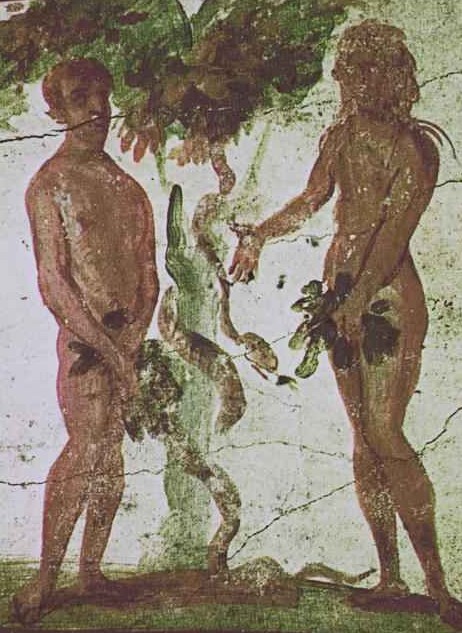 Once upon a time –not quite “in the beginning,” but not too long after– a snake had a question. He sauntered up and posed it quite politely, and if you’d been there you’d have agreed that both his posture and his manners were impeccable.

He found the Mother of All Mankind minding her own beeswax in the middle of the arboretum, and he leaned his lanky limbs against the trunk of a tree, cocked his head a little to one side, and mused, “Excuse me, I was just wondering. Just a clarifying question here; just a little follow-up, just out of curiosity, just playing devil’s advocate for the sake of argument; I’m jusssst asssssssking.”

What Snakey was wondering was, “What did God really say? What were his words, and what do we think those words were worth? And when this God guy said, ‘Don’t eat this one fruit,’ how exactly did he say it? Did he act like he really meant it? I mean, what was his body language? Did he leave any, y’know, wiggle room?”

The Mother of Mankind –M.O.M., “Mom” for short—mumbled something about the fruit being poison. Old Snakey snickered, spit, and hissed out, “Excuse me, it’s just, I suspect he’s saving the best stuff for himself. I mean, just in general does this God character, whatshisname, seem like the sort of guy who’s got your best interests in mind? Because all I know is that this fruit is a world of fruity goodness, woman. You’ve heard of  awesome sauce: this is it. It’s like anti-poison. It’s the original eye-opener. One bite of it and you stay bit by it, baby. Trust me, eat it and you’ll get godlike superpowers; eat it for a performance-enhancing brain boost; eat it and bang! you’re an omnicompetent multitasker; will you eat it; eat it; eat it.”

As she listened, Mom found herself already staring hard at the tree, and it had long since begun to seem good, true, and beautiful to her. If you’d been there you’d have agreed. Ask Adam: he was there, and he agreed. In fact, for a while he claimed eating it had been his idea to begin with, but later on his story changed. Together they took the bait, gobbled it down, and in licking their lips they signed up for Team Snake.

Years later, in marriage counseling, Adam and Eve would look back on that furtive picnic as the last thing they really did together. They stayed married, of course, but it seemed like a lie, just keeping up appearances for the sake of the kids. Somebody had to raise Cain, and Eve was glad to point out that that was one thing Adam was good at.

They set up house together in a gated community way out east of Eden, but life was hard now, things were thorny, and something had obviously come between them. They both had long commutes in opposite directions, and traffic was always slow going both ways, which (as Adam regularly pointed out, rather too loudly) didn’t even make sense because people were a new idea back then.

Regrets? They had a few. “Maybe we bit off more than we could chew,” offered Eve.

“Maybe we had too many pets,” admitted Adam.

“Hey, whatever happened to that snake?” wondered Eve. “What got into him, anyway? Punk acted like he owned the place.”

They never really broke up, but they definitely grew apart. Everything grew apart now, because it seemed like in this new world they’d made, everything that rises must diverge.

Mainly they grew apart from God and tried to give the impression that they’d never really been that close to begin with. They tried having him over to the house a few times, but things were awkward. He didn’t really have what you’d call the gift of small talk.

But even though they couldn’t hang out with him anymore, they had to admit he had saved the day for them again and again. He was the one who had stepped in instantly to stop them from falling any further back on Crash Day. He was the one who took care of everything: new clothes, relocation costs, real estate, a job placement program. He was like a Father to them, not to mention a dietitian, personal shopper, travel agent, labor coach, legal counsel, child care provider, social services coordinator, and more. Food, clothes, and money were always showing up that nobody could account for. One of their nicknames for him was “The Fixer.”

“Yeah, the Big Guy,” Adam said, looking out the bay window to see what the kids were up to in the far corner of the backyard. “Can’t live with him, can’t live without him,” he laughed. Eve laughed too, but it was the very death of mirth.

(What is this? An unusable bit of rough draft from a creative writing project that went another direction. Don’t expect any more of it any time soon, but I wanted to put it somewhere. Happy New Year, people of Earth!)