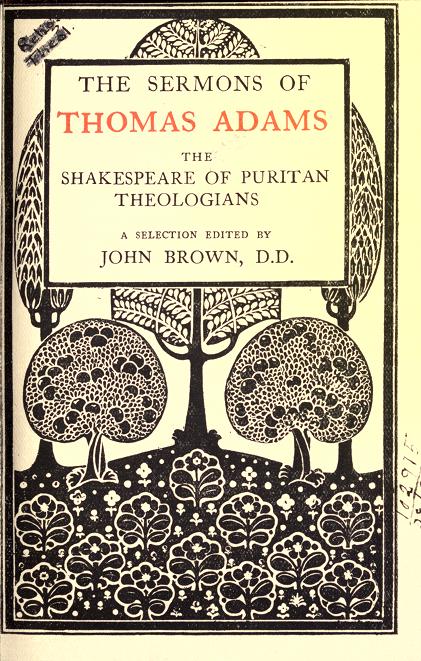 Thomas Adams (1583–1653) was a famous preacher, and no wonder. His sermons are so full of ideas and fresh expressions that they fill the mind to bursting. What follows are just some notes I took on a few pages of one sermon. The sermon is “Semper Idem, or The Immutable Mercy of Jesus Christ,” and in it, Adams digs deep into the short verse Hebrews 13:8: Jesus Christ, the same yesterday, and today, and forever.”

There are a couple of opening paragraphs in which Adams notes what Hebrews is doing by associating the name of Jesus with the times of eternity: God’s name YHWH, meaning I am that I am, “is an eternal word, comprehending three times: that was, that is, and is to come… Now, to testify the equality of the Son to the Father, the Scripture gives the same eternity to Jesus that it doth to Jehovah.” But “eternity… is only peculiar and proper to God.”

The conclusion, stated crisply: “Therefore he was not only Christus Dei, the anointed of God, but Christus Deus, God himself anointed.”

Adams’ next move is, in my opinion, bold and masterful. He opens up the words of the text by describing them in terms of a simple geometric figure encoding a few obvious relationships.

You can probably picture that as soon as you hear it or read it, but just in case, here’s a quick sketch of the suggested figure. The reason Adams’ division of the text is so powerful is that while he is immediately explicating the sense of the sentence (you can read the sentence discursively if you start from the center and treat the three radii as one), he is also describing the substance of the doctrine: “The immovable centre is Jesus Christ,” and around him runs eternity.

Adams analyzes the name: “Jesus was his proper name, Chris his appellative. Jesus a name of his nature, Christ of his office and dignity.”

Jesus is “a name of all sweetness,” and Adams quotes a saying from “Ber. in Can.:”

Mel in ore,
melos in aure,
jubilus in corde.

“Ber. in Can.” means Bernard of Clairvaux’s sermons on the Song of Songs, Sermon 15.6. The word order in the best editions is a little different (Iesus mel in ore, in aure melos, in corde iubilus), but the saying became one of the greatest hits of the late middle ages in the form Adams quotes. It means “honey in the mouth, music in the ear, joy in the heart” and is one of the million ways Bernard found to express the fact that there is a progression of sweetness the more perfectly and inwardly you know Jesus. A lot of Adams’ moves here seem to echo that sermon of Bernard, which is based on the text “thy name is like oil poured out,” and is all about the name of Jesus and the names of God: calling something “a name of mercy,” for example, is from here.

Back to Adams, who just generates a whole series of quotable expressions for the next few pages:

“When the conscience wrestles with law, sin, death, there is nothing but horror and despair without Jesus.”

“He is the way, the truth, and the life: without him, error, mendacium, mors.”

“The Word of God, the Son of God, the Christ of God, are titles of glory; Jesus, a Saviour, is a title of grace, mercy, redemption.”