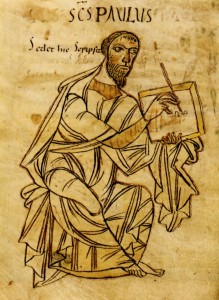 The whole Middlebrow team has stayed busy this summer working with Wheatstone Academy, a ministry which runs week-long summer conferences to equip young people to take a full-grown Christian faith and worldview to college with them. Starting Sunday, we’ll be leading the final conference of the summer. At this conference, faculty and students will spend the whole week saturating our minds with Colossians, just like James M. Gray said we should. We’re all as giddy as new converts about it. Here is a short (850 words) motivational introduction to Colossians that I wrote for the occasion. Colossians isn’t even my favorite book of the Bible, but ask me about it again in one week and we’ll see.

I. Why Read Colossians?
The book of Colossians is tiny (95 verses in 4 chapters), but its scope is enormous. In this letter, Paul looks from prison up to heaven, “where Christ is seated at the right hand of God,” and scans the history of God’s mighty work of salvation from creation to the return of Christ. In this late letter, Paul presupposes all the truths of the Gospel which he has written about in previous letters, and goes on to teach things which he has never explained before. He is fully aware that in doing so, he is teaching “deep knowledge” (epignosis) of “the mystery which was hidden from past generations but which has now been manifested” (1:26).

What is it that expands Paul’s ideas and language in Colossians beyond their usual scope? It is Christ: the one in whom all things hold together, the one who has pre-eminence in everything, the one who is above all powers and authorities, the one whose cross is God’s way of reconciling the world to himself. When you read Colossians, you run the risk of catching a glimpse of this Christ.

The epistle is short, brilliant, powerful, and intended not just for an ancient church in Colossae, but also for other readers. In Colossians 4:16, Paul encourages the church to have another nearby church in the city of Laodicea read the letter. All scripture is good for all believers, but this letter was directly intended to be shared with a wider audience, an audience which now includes us.

Paul wrote this letter from prison. On his third missionary journey, he had written the Corinthian letters, Galatians and Romans. Now during a temporary imprisonment, he had some time to reflect on the way the Gospel was spreading through the world, and to write to some of the young churches which he hoped to visit once he was set free.

What kind of church was the congregation in Colossae? The city itself, located on the Lycus river in Asia Minor (today we call it Turkey), is a small town whose claim to fame was having the third best medicinal spa in the region. Paul tended to focus on larger cities, and that may be why he dispatched his assistant Epaphras to bring the good news to this smaller town. Nobody has done a major archaeological dig at this site yet, so everything we know about the religious situation of first-century Colossae is from reading between the lines of Paul’s letter. Apparently the members of this church were basically from pagan backgrounds, but there was evidently some Jewish influence as well.

III. How to Read an Epistle

When you read one of the books of the Bible which is written in the form of a letter or epistle, there are two things to bear in mind. First, this document is not an orderly discussion of key ideas in logical, systematic sequence. Paul is not acting like the author of a book, setting everything in order and keying it to a table of contents. A New Testament epistle is a lot more like a personal letter (though that is not an exact parallel either).

Second, remember that you are hearing one side of a conversation, and that a lot of things you hear Paul saying would be clearer if you could hear the other side. From a glance at chapter 2, it is obvious that somebody in Colossae is teaching false doctrine: something about strict religious observances, worshipping angels, not touching certain things, and so on. Whatever is going on in Colossae, Paul has heard about it from Epaphras, and much of what he writes is probably a direct reaction to it. Everything scholars know about the Colossian situation is learned from reading between the lines of this letter, so try it yourself: imaginatively reconstruct the kind of heresy that must have caused Paul to write like this.

Whatever the situation in Colossae was, Paul’s solution is clear: focus on the greatness, finality, and sufficiency of Christ. The Christ of Colossians is too big for any false teacher to find a way around: he is before all creation, above all powers, descended to the shame of death on the cross, and “in him dwells all the fullness of divinity, bodily.” Paul is eager to see these young Christians grow up and experience Christian maturity, and he is uncompromising in his rejection of any scheme of maturity that tries to add some condition besides Christ. Colossians teaches a very high view of Jesus Christ, identifying him with God and affirming that the one who redeems us is the one who created us. The church, therefore, is not a little religious society somewhere on the vast stage of world history and the natural universe. The church, as the body of this cosmic Christ, is the one place which is intimately joined to the maker of all things. The church is the place where truth is centered. Like C. S. Lewis’ Narnian wardrobe, it’s bigger on the inside than on the outside, and the journey to Christian maturity is a journey further up and further in.