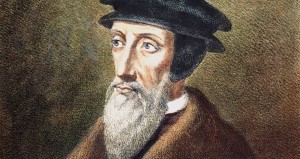 On July 10 in 1509, John Calvin was born. Why not celebrate with a birthday party?

I am always astonished at the amount of anti-Calvin sentiment abroad in the world. I myself am a Wesleyan theologian, so there are a few key areas –maybe about 5– where I come into disagreement with Calvin. But that doesn’t keep me from putting Calvin on my short list of greatest theologians in the history of the church, up there with Athanasius, Augustine, and Aquinas (the A team). And when it comes to authorship, Calvin emerges from that elite pack as undisputed master, for two reasons: he’s the only one who wrote a book which is capable of discipling its reader and teaching the craft of theology. Reading Calvin’s Institutes is like becoming an apprentice to one of the world’s greatest theological craftsmen. The Confessions and the Summa Theologiae won’t do that for you (though they do a lot of other things well). Secondly, Calvin wrote a great quantity of biblical commentary which actually manage to take you deeper into the meaning of the passage he’s commenting on (a rare gift among accomplished theologians).

But people hate John Calvin; especially people who don’t know anything about him. Because popular bigotry against Calvin is so pervasive and deep-seated, I’d like to step aside and leave the task of defending him to a better essayist, Marilynne Robinson. Robinson is now justly famous for her 2004 novel Gilead, which won the Pulitzer. But back in 1998, she published a set of essays called The Death of Adam: Essays on Modern Thought . One of the essays, entitled (oddly enough) “Marguerite de Navarre,” is her attempt to plead Calvin’s case against modern detractors.

The whole essay (along with its sequel in the same volume) is worth reading. Robinson pulls tricks like calling her subject by his French name “Jean Cauvin,” just to “free the discussion of the almost comically negative associations of ‘John Calvin,’ which anglicizes the Latin name under which he wrote, Ioannes Calvinus.” She calls him Cauvin because “the name Calvin …is so burdened that I choose to depart from custom.” And in the third sentence, she confesses that she entitled the essay “Marguerite de Navarre” because ” If I had been forthright about my subject, I doubt that the average reader would have read this far.”

Here are some of the best bits from that brilliant essay.

On the ignorant prejudice against Calvin:

People know to disapprove of him, though not precisely why they should, and they know he afflicted us with certain traits the world might well wish we were in fact afflicted with, like asceticism and an excess of ethical rigor.

There are objections to Calvin and to the enterprise of classical theology which it would be well to address at the outset. This great project, theology, which for so many centuries was the epitome of thought and learning, the brilliant conceptual architecture of western religious passion, entirely worthy of comparison with any art which arose from the same impulse, has been forgotten, or remembered only to be looted for charms and relics and curiosities.

The next sentence, on chronological snobbery:

We are forever drawing up indictments against the past, then refusing to let it testify in its own behalf –it is so very guilty, after all. Such attention as we give to it is usually vindictive and incurious and therefore incompetent.

After defending him against being anti-woman and anti-ecology, Robinson notes:

If subsequent generations found in Cauvin a pretext for misogyny or rapacity or contempt for humankind, as historians sometimes claim, it is surely because they were determined to find one. They could easily have found pretexts in his theology for acting well, if they had wanted them.

Against the idea that Calvin is the inventor of predestination and its main advocate:

Cauvin’s apparent isolation with the burden of this thorny doctrine is an artifact of the history of polemic rather than of controversy.

On his intellectual style:

His theology is compelled and enthralled bv an overwhelming awareness of the grandeur of God, and this is the source of the distinctive aesthetic coherency of his religious vision, which is neither mysticism nor metaphysics, but mysticism as a method of rigorous inquiry, and metaphysics as an impassioned flight of the soul.

On his work as a Bible commentator:

In his commentaries on Scripture, he scarcely slights a verse, or fails to pause over any issue of interpretation of the Hebrew or Greek. By dint of unimaginable labor he creates a body of interpretation that is not allegorical, not analogical, and not offered by him as certainly true. Where he is uncertain, he offers alternative interpretations and tells the reader to decide among them. He tries to avoid forced readings, and he is carefully attentive to the immediate context of a phrase or passage. He is sometimes called the father of modern exegesis.

On Calvin’s Geneva as a police state:

Characterizations of Calvinist Geneva are only meaningful relative to the standards of the time, and relative to reasonable expectation. Pluralism was not a value of late medieval and early Renaissance Europe, the period of the Inquisitions, of the expulsion of the Moors and the Jews from Spain, of the destruction of the Hussites in Bohemia — these centuries were one long, fierce purge. I know of no reason to consider Geneva severe at all by the norms that prevailed around it.

Many of us know that Calvinism was a very important tradition among us. Yet all we know about John Calvin was that he was an eighteenth-century Scotsman, a prude and obscurantist with a buckle on his hat, possibly a burner of witches, certainly the very spirit of capitalism. Our ignorant parody of history affirms our ignorant parody of religious or “traditional” values. This matters, because history is precedent and permission, and in this important instance, as in many others, we have lost plain accuracy, not to speak of complexity, substance, and human inflection. We want to return to the past, and we have made our past a demonology and not a human narrative.

These are the high points of the essay, but the whole thing is great. Join me in wishing John Calvin a happy birthday, “promptly and sincerely, from the heart.”