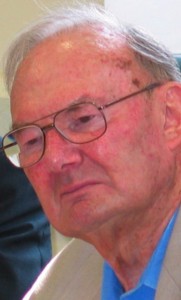 John Hick, a major philosopher of religion, has died at age 90. Friends and students had just brought out a festschrift in his honor weeks before his death.

Hick’s theological conclusions were decidedly on the liberal side of the spectrum, and his intellectual legacy will be the greatest among those who are least concerned about orthodoxy. But his best books had a sharp, critical edge that made them required reading for every serious thinker on issues like the problem of evil and religious pluralism.

One evangelical philosopher who interacted with Hick over the last twenty-five years is Doug Geivett. At his blog, Doug has just posted a reflection on his encounters with Hick, and this assessment of why this man was one of the unignorable voices in modern philosophy of religion:

John Hick was a brilliant communicator, in print and with a microphone. He was a gracious scholar who respected would-be scholars 40 years his junior. He was tenacious in defense of his many controversial positions, and friendly and tolerant toward those who disagreed. Always fair-minded and even-handed in his dealings with me, he marked my life in ways no other scholar of similar repute has (or could have), and he steered me in ways he would never have known.

John was Irenaean as opposed to Augustinian in his theodicy, a universalist and a pluralist in soteriology, a kind of Kantian anti-realist regarding the existence and nature of God —all things that I am not. But there are two reasons why he could not be ignored. First, he reasoned his way to his positions with great care and he could articulate them with great clarity. Second, he had begun his theological odyssey as an evangelical of more-or-less the sort that I am, but had gradually and in nearly step-wise fashion moved further and further away from this starting point in his career as a professing Christian. His kindness toward me would naturally count as a third reason to engage and evaluate his work with the same care that he exemplified as book after book flowed from his pen.