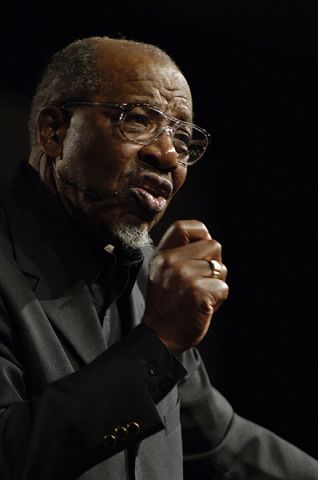 Last Saturday, John M. Perkins spoke at the annual harvest banquet of the Los Angeles Bible Training School. Perkins is a living legend, and LABTS is a great old school “dedicated to the task of instructing Christian workers in the Word of God.” It seems that lots of churches are starting Bible Institutes and Ministry Institutes lately, but LABTS has decades of experience at doing it right: They teach laypeople how to read the Bible and understand theology.

Perkins spoke to the assembled friends of LABTS from the text of Psalm 11. He focused in on verse 3, which in the KJV he was reading from says “If the foundations be destroyed, what can the righteous do?” “The foundations” that he had in mind are the family and the community, and he reeled off a series of statistics and anecdotes about the breakdown of family and community in America that are heart-rending. Perkins was primarily speaking with the Black community in mind, but he describes an America we’re all living in. The foundations are not in good shape.

If the foundations be destroyed, what can the righteous do? However the Psalmist intended the question, Perkins doesn’t take it to be a rhetorical one. He really wants to know what action the church should take after the destruction of the cultural foundations. He has five suggestions, if “suggestion” is a strong enough word for somebody who knows how to speak in a prophetic mode. I can’t do justice to the whole sermon, because there are some things that you have to be John M. Perkins to say. But here are my notes on what Perkins says the church should do:

1. Bring Faith Back, and since faith comes by hearing, and hearing by the word of God, “bringing faith back” means teaching the Bible more and more and more. If that doesn’t sound like an action plan, the rest of Perkins’ points might not be of interest to you. He’s serious about this fundamental evangelical task.

2. De-Hijack Prayer from the name-it-and-claim-it prosperity people. Prayer itself has been hijacked: its whole logic and direction are reversed when we misunderstand it as approaching God to ask that his divine power bend itself toward dispensing blessings on us for the sake of dispensing blessings on us. The biblical idea is that blessings are a means to an end, and the end is God’s name, God’s kingdom, God’s will. Prosperity takes all of that, forcibly, in the other direction.

3. De-Colonize the Gospel. Europeans exported to Africa and a gospel that subdued the land, extracted the gold and jewels, and then left. Christian missions left a legacy of racism in South Africa and the American south. You may recognize this analysis as one of the postmodern reasons for scrapping the Christian faith and repudiating missions. Nonsense, says Perkins. The real gospel is actually in there somewhere, patiently waiting to be disentangled from the colonialist interests it was forced to serve in our history. De-link those two and watch the word spread again.

4. Bring Church Back to the Center. Church, not weekly spectacle without personal investment in community; not para-church gatherings with no authority and no accountability; not the thousand ways we’ve figured out how to get a little Christian information and influence into peoples lives without actually bringing them into lives of committed, costly fellowship.

5. Have a Philosophy of Development. It’s not enough to get a little excited about making a difference, we need to have a comprehensive philosophy of what helps people, and operational plans for making progress. Perkins calls it community development, and has spent decades spelling it out as the three R’s: Relocation, Reconciliation, and Redistribution. If you’ve never heard of this program, you’re probably not trying to find out; after all, these Perkins things haven’t been done in a corner. If it sounds socialist to you, fear not: anybody who can call this a “philosophy of development” isn’t as economically clueless as all that.