I’m intrigued and encouraged to see the first issue of the Journal of Inductive Biblical Studies, a new journal scheduled to appear twice a year and devoted to

The first issue can be downloaded free from Asbury Seminary’s “ePlace” library resource site. Go check it out.

What’s unusual about this journal is that “inductive Bible study” seems more like a technique or style of popular-level, that is to say non-academic, interaction with Scripture. But by using the phrase “Biblical Studies” in the journal title, the editors are signalling that this is a Bible study movement that has come of age and is ready for more critical reflection, methodological self-awareness, and –who knows– intellectual respectability.

One of the editors, David Bauer, is the professor who taught me the methods of intense, inductive Bible study in a class on Matthew’s Gospel at Asbury Theological Seminary. It was a technique of structural analysis that made immediate sense to me, and helped me turn my personal Bible study into preparation for an academic ministry.

This issue looks very good. An article by theologian William Abraham article is the most thought-provoking, and does a great job pushing Inductive Biblical Studies into dialogue with movements like the Theological Interpretation of Scripture. But the three articles by Walters, Lyons, and Dongell are the place to start if you want to see the method in action.

This issue also features an article by Fred Long (a friend who was a few years ahead of me at seminary) that explores the history of IBS and spells out some of its key categories more fully. Check out this interesting chart that takes a shot at tracing some of the lines connecting the various manifestations of IBS in the 20th century: 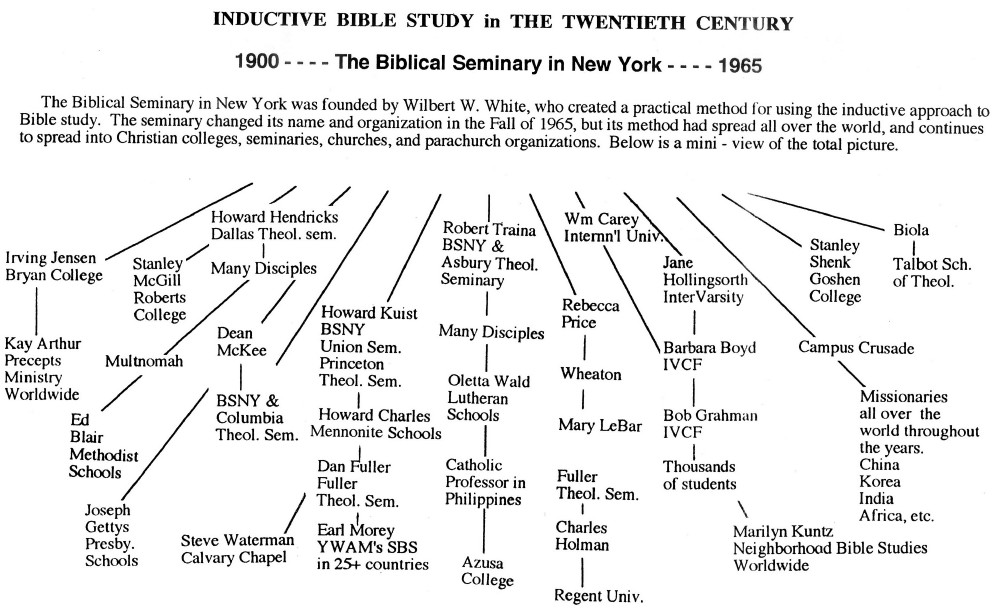 One of the developments to look froward to as JIBS gets established is the filling out of this chart more completely. Inductive Bible Study has been vastly influential, but has occupied a strange twilight region so far, not well enough recognized in academia to present itself as a self-conscious force; and not clearly branded enough to be called the same thing from place to place at the popular level.