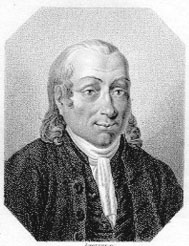 Today (August 25) is the birthday of Karl Friedrich Bahrdt (1741-1792), a theologian so bad that it is hard to find anything good to say about him. (He liked tolerance. There, I said one good thing about him.) He was, says one encyclopedia, “a caricature of the vulgar rationalism of the eighteenth century.”

A Lutheran preacher’s kid, Bahrdt started studying theology in 1757 in Leipzig, at age sixteen. He became famous for “pranks,” one of which included using Faust’s magic symbols to try to summon demons. Um, that’s what the history books say. These shenanigans led somebody to appoint him as a lecturer on the Bible by age 20. And he kept climbing the academic ladder: a doctorate from Erlangen, a post at Erfurt, a move to Giessen. He had mistresses, saw prostitutes, fathered and abandoned numerous illegitimate children, left his wife, and had creditors always at his heels.

Then in his thirties the books started pouring out: In 1773 he published something called “The Latest Revelation of God, in Letters and Stories.” It was a version of the New Testament, with updated language and modern ideas. Here’s part of Matthew 4:

Jesus traveled through all of Galilee and preached publicly in the synagogue the comforting news of the new religion, into which God invited all of humanity with the promise of eternal life; on doing so, he (in order to acquire the trust of the people) healed all kinds of illnesses and burdens; which in turn spread his name throughout all Syria, so that soon people began to bring all kinds of people afflicted by painful evils, even the ecstatic, the sleepwalkers, the paralytic.

–and a footnote explains that since the Jews believed that when people behaved oddly they had a spirit possessing their organs, “Christ too treated them so.”

When Goethe read it, he wrote a little spoof in which Dr. Bahrdt looks at a Bible and says “Here’s how I would have talked, if I were Christ!”

In 1775, somebody thought this sterling character should be in charge of a boy’s school in Switzerland. Bahrdt brought out a second edition of his New Testament, and it brought him under direct scrutiny of the Imperial Council. By this time, people were finally beginning to suspect he might not be a believer.

By 1778, he was asked for a confession of faith, and what he came up with included precious little beyond lines like “I cannot understand the Trinity and the Divinity of Christ in the way Athanasius explained it” and “I am, as far as my faith is concerned, bound by no man’s authority, but I have the right to test all things.”

By 1780 he was committed to propagating a rationalistic moral system that would replace Christianity. 1787’s System of Moral Religion is bluntly anti-supernatural, and 1790’s Catechism of Natural Religion sounds uncannily contemporary:

Q: What is religion?

A: By religion, we mean not just knowledge of God, but also the way of thinking and the way of acting that is in accordance with this knowledge.

A: God is a being that is completely unknown to us. I think of a primal origin of all things, or the universe, and of a being who I can also thank for my existence; and this I call God.

Q: How do you know that there is such a being?

Q: What is the difference between knowing and believing?

A: We only actually know what we are aware of through our senses.

Starting in 1784 and continuing until his death, Bahrdt published a series of “explanations of the plans and purposes of Jesus,” subtitled “in letters to truth-seeking readers.” Running to 3,000 pages, this series is Bahrdt’s contribution to the life-of-Jesus movement. With these, which Albert Schweitzer described as one of “the earliest imaginative lives of Jesus,” Bahrdt reached a new low.

His basic idea, according to Schweitzer’s report, is that there was a secret society, a sort of Essene version of the Freemasons, which used Jesus to spread its work. These Freemasons had been meeting in their lodges and scheming about how to get the Jewish people as a whole to give up their nationalism and their barbaric religious views, and accept a pure, spiritual, masonic form of worship. When the secret members of the Essene Order took young Jesus aside and taught him about Plato and Socrates, Jesus wept. He was so moved by the story of the death of Socrates that he wanted to die like that, too.

This is all in pretty bad taste, but to make matters worse, Bahrdt takes hundreds of pages of fully-scripted dialogue to relate these events. And he has a whole army of invented characters to move the story along (Haram, Shimah, Avel, Limmah, etc.). These guys, highly-placed secret brothers, help Jesus attain the rank of First Degree, and then they follow him around, helping stage-manage the various miracles that Jesus fakes. Of course they fake his death and resurrection, put together a light show to impress Paul, and get the new religion off to a good start.

In 1788 the Prussian minister of religion told all the theology professors that it was time to play nice and stop making fun of Jesus. He issued an Edict on Religion to that effect. Most people would see the words “edict” and “Prussian” in one title and know it’s time to play safe. Bahrdt, to the contrary, published a satire of the edict. That landed him in jail for a year, and he spent the time writing “smutty stories and his autobiography, a mixture of falsehood, hypocrisy, and impudent self-abasement.”

He lived for another couple of years after his release from prison, and died from either mercury poisoning or venereal disease.

And today’s his birthday!