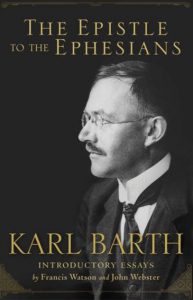 Way back in 1921, Karl Barth taught a course on Ephesians. The lectures from that course have finally been published in English, and while they have some of the defects that are to be expected from a lecture script that the author never revised for publication, they do not disappoint. This short book records a powerful encounter between a great theological teacher and the word of God in Ephesians.

Barth’s point of departure here, exegetically, is the insight that the kathos of verse 4 functions, in this very long sentence, “like a colon” so that it doesn’t just refer to verses 4-6, but sets up the entirety of 4-14. All well and good. But where Barth’s theological superpowers kick in and deliver something different from the average commentary is when he pauses to examine the kind of unity these grammatical signs signify:

Note well that the succession of three or four trains of thought does not constitute three different truths. Nor does their relationship consist int he fact that they constitute a plan, method, or history. Rather, a single truth is expressed here in three distinct forms, and the distinct meaning of each individual form can be understood only by noting how each relates to their common origin. What relates this succession of thought forms is that each in turn depicts what cannot be depicted: the single act of God, his [having blessed us with every spiritual blessing in heaven in Christ]. In view of the single act of God, we can (with Calvin) emphasize the blessing of God from which we come, and therefore the God who predestined. We can (with Luther and many others) place the emphasis on the blessing of God in which we stand, on the forgiveness of sins. Or, finally, we can place the emphasis (with Blumhardt, for example) on the blessing of God to which we are headed so that we emphasize eschatology.

The decisive thing with each of these distinctive emphases is that we know what we are doing and why, namely, that with the perceptible, temporal truth with which we speak, we actually mean the one, imperceptible, eternal act of God.

The unity of Ephesians 1:3-14 is not something you can put your finger on. But it’s something you can point to with your big Grunewaldian index finger of witness. It’s no surprise, given the other things Barth was working on at that time (second edition of Romans, lectures on the Reformed Confessions and Calvin, etc), that he pointed so pointedly at the full spiritual blessing in Christ.

But we’ve had to wait a long time to read this stuff. I don’t just mean we’ve had to wait since 1921. I also mean I’ve personally been waiting ever since I learned Barth lectured on Ephesians. Given my high esteem of Karl Barth, my personal testimony to his son Markus Barth‘s work on the letter, and the conviction I share with all reasonable people everywhere that Ephesians is the greatest book of the Bible, you can see why I’d want to read these.

In fact I’ve had them for a while: in 2002 a friend got me some photocopies of Barth’s typescript, and I read it eagerly but with considerable difficulty construing the German. Then in 2006 I read Ross Wright’s dissertation on the lectures, with its translation.

But now Wright’s translation is available in a real book, edited by David Nelson, with insightful introductory essays by Francis Watson and John Webster. Well worth picking up this little book!