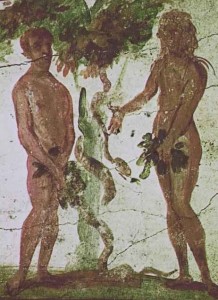 Of all the tiny fragments of Old Testament vocabulary to have washed up on the shore of secular culture, one of the oddest is the old bit about “knowing in the biblical sense.” People who don’t know or care to know (in any sense, biblical or otherwise) about anything from the Old Testament somehow got the word that “Adam knew Eve, and she bore him a son.” So “know” must mean some activity that results in babies, eh? Wink wink, nudge nudge.

Okay, right enough as far as it goes. But whenever I hear somebody say “They got to know each other … in the biblical sense!” I always miss the punchline cue because it makes me think about what the Bible means by knowledge. My mind reels as I try to imagine getting to know someone just in the Johannine sense! A biblical theology of “to know” would be an awesome thing, a thing worth pondering, a life-transforming thing. “To know in the biblical sense” …what an expression! But of course by this time I’ve missed my chance to laugh at a clever way of referring to sex, and apparently our culture feels a dire need to extend its range of witty innuendo on that all-consuming subject. Meanwhile, I’m thinking about what it would be like to have a complete understanding of what scripture means by knowledge.

Here’s one of the best general descriptions ever written about what knowledge means, “in the language of the Bible.” It’s by Karl Barth, and it occurs in the middle of a discussion about how Jesus Christ makes himself known:

We cannot impress upon ourselves too strongly that in the language of the Bible knowledge (yada, gignoskein) does not mean the acquisition of neutral information, which can be expressed in statements, principles and systems, concerning a being which confronts man, nor does it mean the entry into passive contemplation of a being which exists beyond the phenomenal world. What it really means is the process or history in which man, certainly observing and thinking, using his senses, intelligence and imagination, but also his will, action, and ‘heart,’ and therefore as whole man, becomes aware of another history which in the first instance encounters him as an alien history from without, and becomes aware of it in such a compelling way that he cannot be neutral towards it, but finds himself summoned to disclose and give himself to it in return, to direct himself according to the law which he encounters in it, to be taken up into its movement, in short, to demonstrate the acquaintance which he has been given with this other history in a corresponding alteration of his own being, action and conduct. We can and should say even more emphatically that knowledge in the biblical sense is the process in which the distant ‘object’ dissolves as it were, overcoming both its distance and its objectivity and coming to man as acting Subject, entering into the man who knows and subjecting him to this transformation.

Knowledge… in the biblical sense.