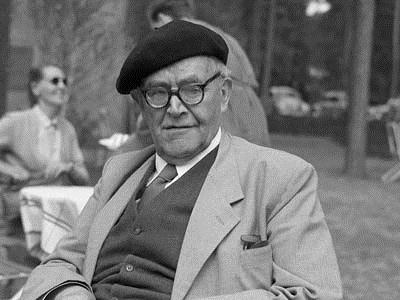 A note here on how Karl Barth viewed his teaching in the late 1940s in Basle. Barth was deep into writing Church Dogmatics III, and as usual he was developing the voluminous text of the Dogmatics out of the four hours of lectures he was giving on the subject weekly.

But four hours of lectures per week was only part of his teaching load in this Swiss university (which was becoming increasingly international in the post-war period). Barth also led a seminar and a discussion group, generally devoted to a book of the Bible and a historical figure. In 1948 the seminar and discussion was devoted to the book of Galatians as interpreted by the Reformers, and Luther’s Greater Catechism. All of this information is from Busch’s big biography (pp. 352-3). Busch reports that “over all these years Barth took his seminars and the discussions which went with them quite as seriously as his lectures.” And here’s what Barth himself said about this division of his work time:

The fact that I devote six of the ten hours a week that I usually teach to these exercises [seminar and discussion] stems from the growing conviction that what can be communicated to the student in this form is probably the most immediately fruitful part of academic instruction. The student should be learning, by means of important texts, to read: at first to become aware, quietly and completely, of the content of these texts, to understand what he has read in its historical context, and finally to adopt a critical attitude towards it. For this he needs the stimulation, the guidance and the correction which is given him by a form of collaboration, in which on the one hand he is addressed and treated by the teacher as a regular fellow-researcher, and on the other he has to consider openly and carefully the attempts of his fellow-students… It is a matter of preparing the student for teaching by his active participation in research.

Acutely conscious that he was in a period of cultural reconstruction, Barth’s pedagogical goals had to strike a balance between the pressing need for educational results (“the most immediately fruitful part of academic instruction”) on the one hand, and long-term planning on the other. “He was concerned,” Busch comments, “in this way to supervise the progress of a sound younger generation of theological scholars.” How? By focusing their attention on proven, classic documents (“important texts”), reading them together (“collaboration… a regular fellow-researcher”), and discussing them with the rest of the class (“consider openly and carefully the attempts of his fellow-students”).

This is how it’s done. The massive, carefully-planned theology lectures poured forth, and the volumes of the Dogmatics emerged year after year, but meanwhile Barth was steadily working to educate the kind of young theologians who would be competent to read those masterpieces and to assess them accurately. Properly trained, these young theologians would not be seduced by false teaching, or even captivated by Barth’s own “hypnotic eloquence.” The clear path forward for theological formation that would make a difference was to gather around a great text, read it together, and discuss.