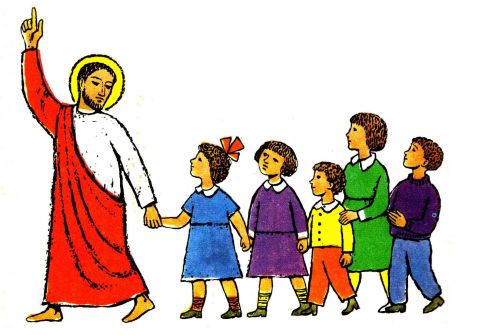 Consider Karl Barth (1886-1968). Somewhere several thousand pages into his masterwork, the Church Dogmatics, he pauses for a moment in the midst of a complex doctrinal argument to pay a debt of gratitude for the children’s Bible songs he sang as a boy in Switzerland. At age sixty-nine, near the end of a long and eventful theological career, Barth comes back around to where it all started for him. Pondering the way we encounter Jesus Christ, Barth says:

I must interpose at this point a small but sincerely grateful tribute. It is to a theologian who cannot be called great, but to whom I am greatly indebted.

I refer to Abel Burckhardt, who a hundred years ago – a contemporary of the more famous Jacob Burckhardt – was the second pastor at the minster here in Basel. He composed and edited a collection of songs for children in the local dialect. This was the text-book in which, at the beginning of the last decade of the last century, I received my first theological instruction in a form appropriate to my then immaturity.

And what made an indelible impression on me was the homely naturalness with which these very modest compositions spoke of the events of Christmas, Palm Sunday, Good Friday, Easter, the Ascension and Pentecost as things which might take place any day in Basel or its environs like any other important happenings.

No – but things actually taking place, so that we could see and hear and lay up in our hearts. For as these songs were sung in the everyday language we were then beginning to hear and speak, and as we joined in singing, we took our mother’s hand, as it were, and went to the stall at Bethlehem, and to the streets of Jerusalem where, greeted by children of a similar age, the Saviour made His entry, and to the dark hill of Golgotha, and as the sun rose to the garden of Joseph.

Was this representation, like the unbloody repetition of the sacrifice of Christ in the Roman doctrine of the Mass? Was it the kind of faith which in that rather convulsive doctrine is supposed to consist in a re-enactment of the crucifixion of Christ in our own existence?

Again, no. It was all present without needing to be made present. The yawning chasm of Lessing did not exist. The contemporaneity of Kierkegaard was not a problem. The Saviour Himself was obviously the same yesterday and to-day.

All very naïve, and not worth mentioning at all in academic circles? Yes, it was very naïve, but perhaps in the very naivety there lay the deepest wisdom and the greatest power, so that once grasped, it was calculated to carry one relatively unscathed – although not, of course, untempted or unassailed – through all the serried ranks of historicism and anti-historicism, mysticism and rationalism, orthodoxy and liberalism and existentialism, and to bring one back some day to the matter itself.

(Note: In the published work, this is all one block of very fine print. I broke it apart into clusters to give it a little more space for reflection)