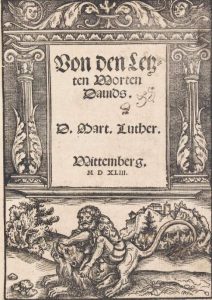 I’m teaching a class session on Martin Luther’s amazing treatise “On the Last Words of David,” which is Luther’s most satisfying exposition of Trinitarian interpretation of the Bible. It really is a handbook of principles on how to interpret Scripture in Trinitarian fashion: how to find the Trinity in the Old Testament, how to understand the inseparable operations of the triune God in the New Testament, and more.

It’s also one of the top five, or bottom five, works of Luther in which he rails against Jews. I find it helpful to call these works Luther’s contra-judaeos works to put them in the patristic literary tradition of which they are a development, and to avoid loosely associative terms like anti-semitic, anti-jewish, and so on. I have no desire to excuse this contra-judaeos element of Luther’s later writings, but I do want to understand it fully on its own terms historically. No doubt I could parade sentence after sentence from this work that we could judge to be anti-semitic as well; but to say so is to jump frames of reference.

These are big questions which we should think about carefully and on a large scale. Here I’m only flagging them.

There’s quite a bit of fascinating historical work devoted to interpreting Luther’s treatise on the Last Words of David in context. Here are some notes on a few of the major turning points in my opinion.

Mark U. Edwards, Jr, Luther’s Last Battles: Politics and Polemics 1531-46 (Minneapolis: Fortress Press, 1983), 134ff. Edwards downplays the contra-judaeos element of Last Words, saying the treatise “just happens not to be a polemical treatise” and only has “critical asides” directed at rabbinic exegesis.” But Edwards does a good job locating Last Words within the set of Luther’s late Judenschriften (Against the Sabbatarians, 1538; On the Jews and their Lies, 1539; On the Ineffable Name and On the Lineage of Christ, 1543. It is very instructive to compare these later works with 1523’s That Jesus Christ was Born a Jew).

John T. Slotemaker, “The Trinitarian House of David: Martin Luther’s Anti-Jewish Exegesis of 2 Samuel 23:1-7,” Harvard Theological Review, 104:2 (2011), 233-254. Considers Last Words “central to Luther’s Adversus Judaeus trilogy” (234) on the grounds that in the earlier works Luther had tried out initial interpretations of 2 Sam 23:17, but perfected and extended his Trinitarian exegesis of it in Last Words.

Stephen G. Burnett, “Martin Luther and Christian Hebraism,” Oxford Research Encyclopedia of Religion, Oxford University Press USA, 2016. “Luther consciously used anti-Jewish polemic in On the Last Words of David to remind Christian Hebraists that Jews are not neutral sources of information about the Old Testament text, but rather were fully convinced foes of the gospel whose scholarship should not be taken at face value. Jewish Bible commentaries were not a neutral source of textual knowledge, but reflected Jewish blindness, stubbornness, and rebellion against God.” In this essay, Burnet builds on his own longer work Christian Hebraism in the Reformation Era (1500–1660): Authors, Books, and the Transmission of Jewish Learning (Leiden, The Netherlands: Brill, 2012).

I’m quite fond of a new book by William M. Marsh, Martin Luther on Reading the Bible as Christian Scripture: The Messiah in Luther’s Biblical Hermeneutic and Theology (Eugene, OR: Pickwick Publications (Princeton Theological Monograph Series)), 2017. Marsh offers robust interaction with Luther’s actual hermeneutical claims, fully informed by the contra-judeos literature but focusing on the central theological claim that Jesus Christ is the real referent of OT messianic texts. Final chapter is on Last Words.