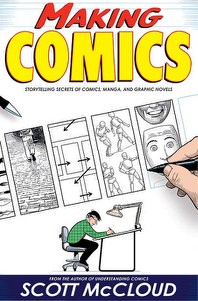 Cartooning is an art form that communicates with great immediacy. We don’t rely on comics for the best literary writing of all, and we don’t look to cartoonists to be the greatest visual artists. Good as the writing and art may be in a comic, we usually look for the highest achievements of word and image in other media.

But if you want word and image bundled together and doing things that they can’t do when they’re separated, comics are the only place to go. The one thing that comics can do that no other medium can do is put word and image together so tightly that they enter your mind as a unified whole. And if you’ve ever seen a real master of the craft lay down images one after another so that they move you through a mental progression, you know that comics do something unique.

The best explanation ever written of the theoretical underpinnings of the comics medium is Scott McCloud’s Understanding Comics. Intentionally echoing Marshall McCluhan’s title Understanding Media, McCloud’s 1993 book was a tour-de-force of critical insight. Persuaded that the medium is the message, McCloud cast his encomium on comics in the perfect form: a comic. If McCloud had written two hundred pages of critical prose on comics, it would have been well worth reading. But he wrote and drew a two-hundred page comic book about comics, and that made all the difference.

Last year McCloud followed up that excellent book with a new one, Making Comics: Storytelling Secrets of Comics, Manga, and Graphic Novels. This one is a real how-to book, again in comic format. 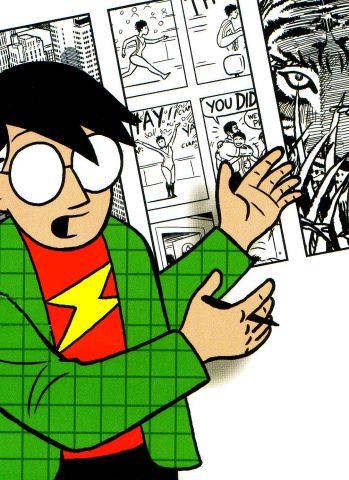 I’ve taught cartooning before, and in order to give students anything instructional to study, I had to cut and paste from a lot of mediocre sources. McCloud’s new book is a 250-page text that brings together everything you need to know in one volume.

McCloud starts at exactly the right place: with the five fundamental choices that a cartoonist has to make in order to set up any attempt at visual storytelling. There’s a choice of moment, choice of frame, choice of image, choice of word, and choice of flow. Take the first one: I used to teach choice of moment by having students make a flip book in which a stick figure carried out some basic action over the course of 100 pages. They had a great time zipping through the hundred images and watching the auto-animated figure jump, cartwheel, run, or whatever. (You can make these flip-books on the corners of your textbooks during dull classes… but of course you wouldn’t) Then, from the 100 frames, I had students select the ten that summarized the entire action. From those ten, I had them select three. That was their three-panel cartoon. The idea is that from a plethora of possible moments, the cartoonist’s fundamental job is to select exactly the right moments to communicate the entire action. McCloud, in the form of his own little talking cartoon man, takes you through all of this fluently. Then he moves on to choice of frame, which amounts to a complete course on composition and layout. And so on through all five choices, all handled expertly. But that’s just the first chapter, and every chapter is packed with insight.

“There are no rules, and here they are,” says McCloud at the outset. Making Comics does a great job of showing how comics work and how they are put together. You could read it just to improve your critical viewing abilities: everything from daily comic strips to graphic novels to movies will make sense on more levels after McCloud’s explanations. But you should definitely read it if you’re interested in expressing yourself in cartoon form.