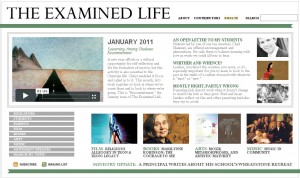 The first 2011 issue of The Examined Life from Wheatstone Academy is online now, and it includes several things that Scriptorium readers are likely to be interested in. John Mark Reynolds has a piece about what he learned from Plato’s Phaedrus (and, as he says, could have learned from the Bible). There are essays, updates, and reviews from the Wheatstone Academy staff, and some good student writing there as well.

This issue also has a short essay by my wife and me, about parenting. The essay is called Mostly Right, Partly Wrong. Here’s an excerpt:

Everybody has some false beliefs rattling around in their head. Let’s say you’ve got a thousand beliefs, and ten of them are mistaken. If we knew which of our beliefs were false, we could just go in and remove them. The problem is that we don’t know which ones they are. If you think you have absolutely no false beliefs lurking in your mind, guess what: That’s one of them! On the other hand, if you let your fallibility undermine your confidence in the truth, you’ve let a few stray notes ruin the whole song.

Our kids need parents who are mostly right, but can admit it when they’re wrong. If we’re training our kids to become adults who obey God in his word, the best possible training is the kind that points them to the perfection of that word. If they were going to spend their entire lives obeying us, the stakes would be higher for us, and perfection would be necessary. But endless obedience to parents is not the kind of maturity we are seeking for our kids. The goal of our parenting, to paraphrase the apostle Paul, is love from a pure heart, and a good conscience, and a sincere faith (1 Tim 1:5).

Click on over to The Examined Life for more.