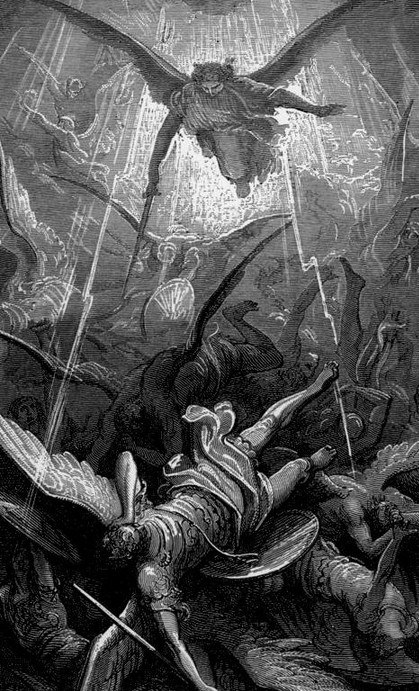 The fallen angels in Paradise Lost are of course shockingly wrongheaded in their estimation of God: Lucifer and company, while in heaven, thought they could beat God in a fight, and some of them continue to think so even after they find themselves greatly diminished and in hell.

It’s hard to imagine what metric they could possibly have been using to think that their strength measured up to the divine, though Satan does at one point claim that God had sneakily concealed his full power from them in order to trick the rebel angels into attacking him. Still, for Satan to imagine he could beat God is a bit like looking at the ocean and guessing, “I bet I could drink that up.” It’s an odd sort of ignorance for such intelligent beings to have.

But these angels/demons have an even odder ignorance, and Milton shows it in two places. First, in Book 2, during the council meeting at Pandemonium, Moloch makes a speech calling for “open war” against heaven, attempting to rouse the fallen troops and re-arm for a new assault. “What’s the worst that could happen?” he asks. “What fear we then?” If we face the thunder of an even more enraged Almighty, could we be “more destroy’d?” Well, maybe so:  Moloch worries out loud that God’s “utmost ire… to the highth enrag’d,” might be strong enough to “quite consume us, and reduce to nothing this essential.”

“Damn the torpedoes” indeed. Even in the council of demons, Moloch stands out as the rash and reckless one. He’s all for re-attacking heaven and being snuffed out of existence. But it turns out he doesn’t actually know if such snuffing out is an option:

Or if our substance be indeed Divine,
And cannot cease to be, we are at worst
On this side nothing; and by proof we feel
Our power sufficient to disturb his Heav’n,
And with perpetual inrodes to Allarme,
Though inaccessible, his fatal Throne:
Which if not Victory is yet Revenge.

If it turns out the fallen angels are made of such divine stuff they can’t stop existing, then Moloch’s willing to make the most of it. If we can’t beat God, at least we can hassle him, and that’s something.

But to me, the big news from Milton land is that the fallen angels don’t know what they’re made of. They are proceeding on guesswork.

As it turns out, Satan and his crew have been proceeding on guesswork all along. In a later flashback, Milton fills in many details about the fall of the rebel angels.  When Satan (at that time “Lucifer”) begins to propose a rebellion to his allies, an angel named Abdiel refuses to join, and gives his reasons. Satan, upset that God has installed the Son as the ruler of the angels, claims to be equal to the Son. Abdiel snorts at the idea: Lucifer may be pretty high up in the angelic hierarchy, but it is madness of him to rank himself with the Son:

Thy self though great & glorious dost thou count,
Or all Angelic Nature joind in one,
Equal to him begotten Son, by whom
As by his Word the mighty Father made
All things, ev’n thee, and all the Spirits of Heav’n…

Paraphrase: “You’re great and all, but neither you, nor all the angels put together, are equal to the Son. He is begotten of the Father, who created all things, including you and all the angels, through him.”

Lucifer/Satan is gobsmacked. Excuse me, gobbsmack’d. “CREATED? That’s the first I’ve heard of it!”

That we were formd then saist thou? & the work
Of secondarie hands, by task transferd
From Father to his Son? strange point and new!
Doctrin which we would know whence learnt: who saw
When this creation was? rememberst thou
Thy making, while the Maker gave thee being?

Paraphrase: “You’re saying we were made? And that God tasked his Son with doing it? No way. Where did you get that? Were there any witnesses? Do you remember it happening?”

To indulge in a little sympathy for the devil, it is hard to imagine how angels would know their origin story. If they all got created at once, and have no ancestors, then one moment there were no angels and the next moment they were all there. Or as Lucifer says:

We know no time when we were not as now;
Know none before us, self-begot, self-rais’d
By our own quick’ning power, when fatal course
Had circl’d his full Orbe, the birth mature
Of this our native Heav’n, Ethereal Sons.

But in that boast, Satan shows that his problem is not a lack of knowledge. His problem is how he leverages that lack of knowledge to support his conviction that he’s the greatest. “Self-begot, self-rais’d by our own quick’ning power” is itself an interesting theory of angel origins, and interestingly false. Satan easily slides over into the implications of his supposed non-origin:

Our puissance is our own, our own right hand
Shall teach us highest deeds, by proof to try
Who is our equal…

Milton’s rebel angels do not know where they came from, what they’re made of, or where they are going. When did they begin to exist? Can they cease to exist? They don’t actually know. Abdiel apparently knows a few things, but that might be because he’s been listening.

Creatures are mysteries to themselves. Humans can ignore this truth, because we are surrounded on all sides by mediating causes, a network of relationships and events and histories that make us what we are and brought us into being. If I am tempted to think I’ve always been here, I can ask my Mom and she’ll let me know in graphic detail that I came into the world once upon a time. I was created by God, and also by my parents. I exist in God’s will, and also in a physical environment. The angels are the primal creatures, who came into being directly from God without created mediation. For them it should be immediately obvious that their existence depends on God. Part of Satan’s derangement is his refusal to make this connection, a refusal that commits him to a program of expansion (“our own right hand shall teach us highest deeds”). But the truth which is so starkly apparent for the angels is no less true of us creatures in the human family: we are mysteries to ourselves, and we need to refer our being to God if we are to avoid derangement.